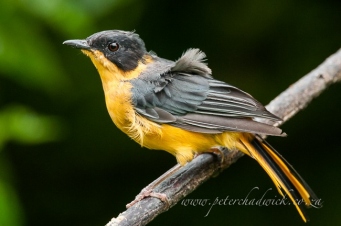 Seldom these days do I get the opportunity to go in search of a new species of bird and so when I was offered the opportunity to do so in one of my favorite parts of the country, I jumped at the opportunity and was soon winging my way eastwards from Cape Town to Durban from where I drove up to Eshowe. I was booked into the Birds of Paradise guest lodge that was situated right on the edge of the Dlinza Forest and which was a welcome place of luxury and friendliness after a long day of traveling. The still of the day was only broken by the wind whispering through the trees of the expansive garden and by incessant calling of Red-fronted Tinkerbirds and occasional calls of Purple-Crested Turacos.

After a quick refreshing cold shower and quenching drink, I headed across to the entrance of the Dlinza Forest where I met up with local bird guide Joatham Maduna. Joatham works as a sugar inspector but his passion for birds led him to become a part time birding guide and he is now well established in the area having guided since 2000. He knows the forest intimately, knowing exactly where and when to find the shy forest dwellers. Within a few minutes of entering the forest, he was calling up Green Malkhoa, Chorister Robin-Chat, Red-Capped Robin Chat, Narina Trogon and Spotted Ground-Thrush. Had I been on my own, I may only have found one or two of these elusive species! He also showed me the kite and bark spiders, Giant Earthworm castes and where bushpig had snouted amongst the roots of the giant trees. Blue Duikers broke from cover occasionally to dash further into the dense undergrowth. 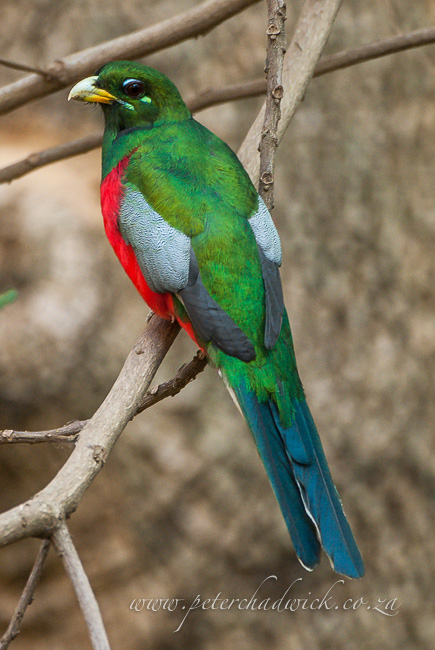 1 of 7. A male Narina Trogon - a species that can be found at both Ongoye and Dlinza Forests

After walking the short trail circuit, we climbed onto the aerial broad-walk to watch White-Eared Barbets, Yellow-Rumped Barbets, Bar-Throated Apalis, Black Cuckoo Shrikes, Sombre Greenbuls, Square-Tailed Drongos and countless varieties of butterflies. A highlight was a birding party that comprised of Collared and Olive Sunbirds, Grey Cuckooshrikes, Dark-Backed Weavers, Olive and Cardinal Woodpeckers and a pair of Olive Shrikes. Sadly, though we tried extremely hard, we failed to find the Eastern Bronze-Naped Pigeons that have eluded me on each visit to the forest and which would have been a new bird species for me. With the last rays of the sun disappearing, we climbed up to the highest point of the boardwalk just in time to watch Trumpeter and Crowned Hornbills flying to their night-time roosts. Flocks of Red-backed Mannikins and Thick-Billed Weavers followed the hornbills and then a magnificent Crowned Eagle circled the forest calling loudly and which brought a memorable end to a few hours birding, 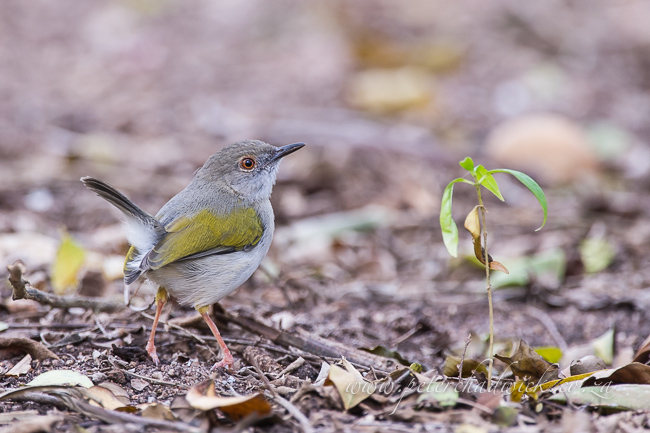 2 of 7. A Grey-Backed Cameroptera hops down onto the ground to forage

I was up early the next morning and after a scrumptious breakfast at the lodge, I headed out to meet up with Sakhamuzi Mhlongo and Junior Gabela who had promised me the chance of seeing a " lifer" with an extremely restricted range. Good friends with one another, there was an immediate friendly competition between the two and with huge smiles they both promised me to be the first to show me the special bird we were searching for. Sakhamuzi works for WESSA and is involved in many community based conservation projects, while Junior also assists WESSA and is based at the Amatikulu Nature Reserve where his specialty is finding the elusive Swamp Nightjar. Despite having lived in KwaZulu Natal for many years, I had never had the chance to visit Ongoye Forest and was very excited to be able to now do so. 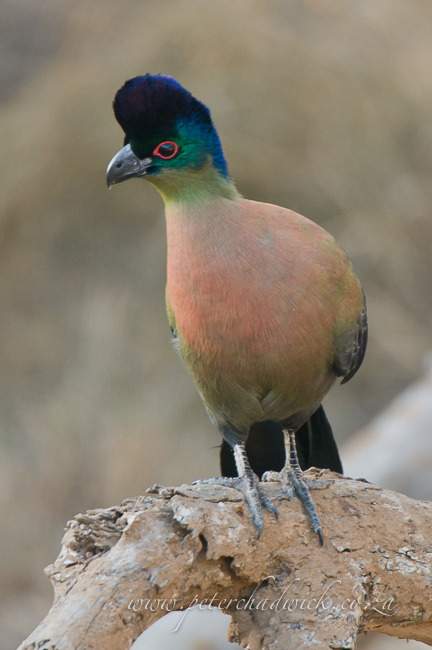 3 of 7. Purple-crested Turaco are common throughout Zululand

After driving along the rough track, we entered through the reserve gates and headed up onto the grassland plateau of the reserve, Junior was brilliant at pointing out the Pale-Crowned, Rattling and Cloud Cisticolas, Neddicky’s, Striped Pipits, Red-Collared Widowbirds and Fan-Tailed Widowbirds and the displaying Rufous-Naped Larks. Not to be outdone, Sakhamuzi quickly found a birding party at the first forest patch. African Paradise-Flycatchers, a Blue-Mantled Crested-Flycatcher, Grey Cuckooshrikes, Square-Tailed Drongos, Olive Shrikes and Dark-Backed Weavers brought a huge smile to Sakhamuzi's face as he showed them to me as they moved through the forest canopy. By now, the challenge was really on between the two expert guides and as butterflies danced amongst the forest canopy, they separated a distance away from one another and began calling repeatedly into the forest. 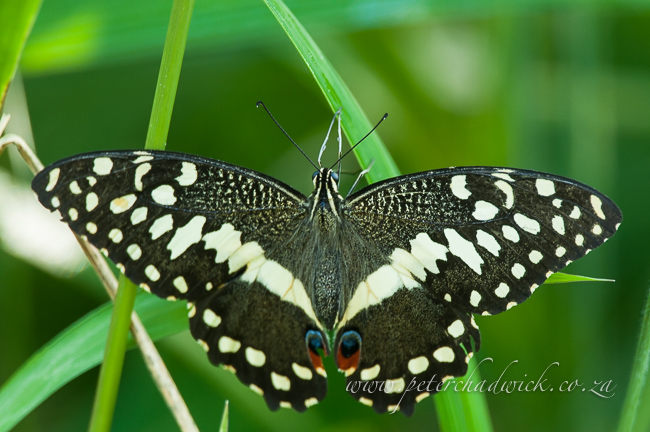 4 of 7. A recently emerged Citrus Swallowtail in the Ongoye Forest

As I waited for them to show me the result of their efforts, I wandered into the forest and was in time to see a bushbuck ram dash off as Samango Monkeys alarm called at my presence. After ten minutes, both guides joined me with a slightly worried look on the faces. I pointed out an endemic Ongoye Red Squirrel as well as a Red-fronted Tinkerbirds and a family of White-Eared Barbets. This only deepened the frowns on their faces as neither of these species were what we were actually trying so hard to find. Finally, there it was, the bird that we had come in search of! Sakhamuzi had slowly expertly guided us towards a large dead tree that had numerous barbet nesting holes in various branches and out of one of them flew the endemic and extremely localized Green Barbet. We then spent several minutes craning our necks high into the tree watching this rather non-descript little bird feeding on ripening fruit and calling occasionally to a mate somewhere far off in the forest. With obvious relief Junior mentioned to me that with the aid of either one of them, visitors stood a 90% chance of seeing the Green Barbet, while if the visitors came on their own, they only had about a 30% chance of seeing the bird. Given the difficulty that we had had, I would definitely in future use the expert’s knowledge of the two guides, as I would not have known where to start looking for the Green Barbet. 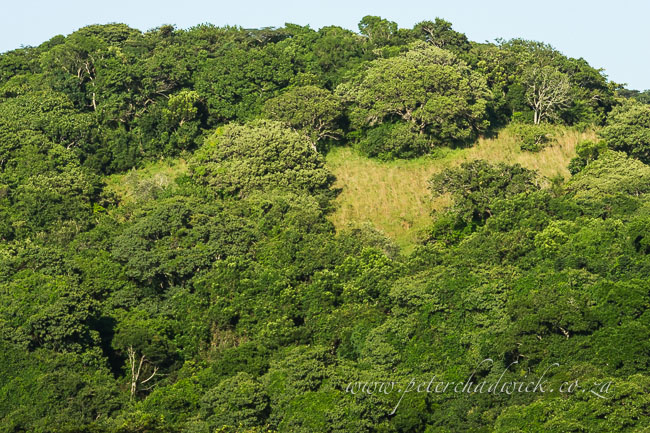 5 of 7. The mixed forest and grasslands of Ongoye is home to the Green Barbet

On the way out of the reserve, we stopped at the small campsite set just in the edge of the forest. Visitors may either camp or make use of the small house, which can sleep six. Amur Falcons and a Yellow-Billed Kite flew overhead and Yellow-Streaked Greenbuls and Tambourine Doves fed nearby. With his confidence back after his promised find, Sakhamuzi causally asked if I would like to also see and photograph a Mangrove Kingfisher at Umlalazi Nature Reserve. With time on our side, we drove the short distance to the mangroves on the reserve where a Goliath Heron stood motionless on the reed lined bank of the river and a juvenile Palm-Nut Vulture took off from within the mangrove trees to join a circling Southern Banded Snake-Eagle in the air above. A pair of African Fish-Eagles sat in the upper branches of a dead fig tree and a Wooly-Necked Stork wandered across the mud flats. Alighting from the vehicle, Sakhamuzi led us a short distance to a patch of trees and sure enough there it was, an extremely relaxed Mangrove Kingfisher. Sakhamuzi said that the birds had only recently returned from their local migration and that he had known this particular bird for a number of years and it had become very relaxed to his presence. 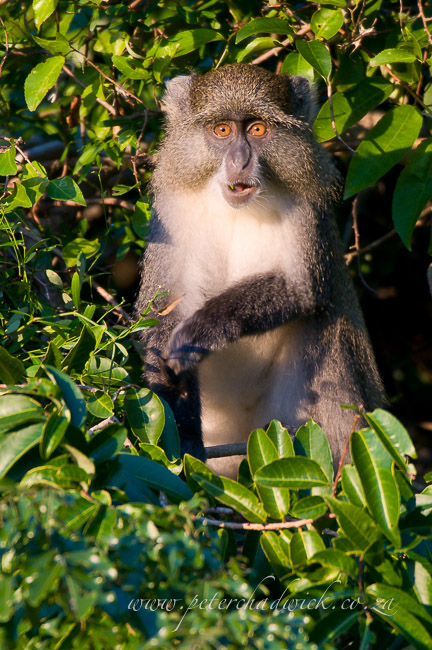 6 of 7. A Smanago Monkey forages in the canopy of Ongoye Forest

Driving out of the reserve to drop off the two guides we were able to add Green Twinspot, Green-Backed Camaroptera and Orange-Breasted Bush-Shrike to our list from an extremely exciting morning of birding and what is more I had done this in the company of two fantastically friendly and knowledgeable birding guides. 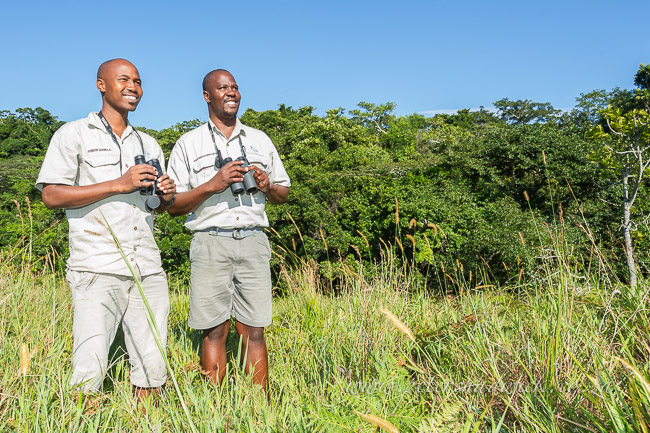 7 of 7. Zululand Bird Guides, Junior Gabela and Sakhamuzi Mhlongo - experts in their field