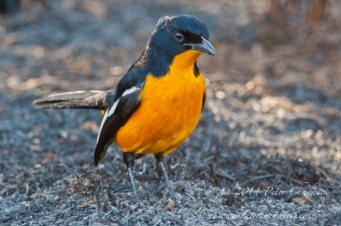 Madikwe Game Reserve has long held a fascination for me and ever since I heard about its plans for development in the early 1990’s, I have kept a close eye on it without actually being able to visit the area. What really attracted me to it was the fact that it is where many of the arid western bird species overlap with their eastern counterparts.

This creates an impressive bird list in a wide variety of habitats and consequently new photographic challenges. When I was offered the opportunity to spend four days in the reserve at the Motswiri Private Game Lodge, I jumped at the chance and was soon heading away from Johannesburg on the N4 to Zeerust and through to the Abjaterskop Gate of the Madikwe Game Reserve. 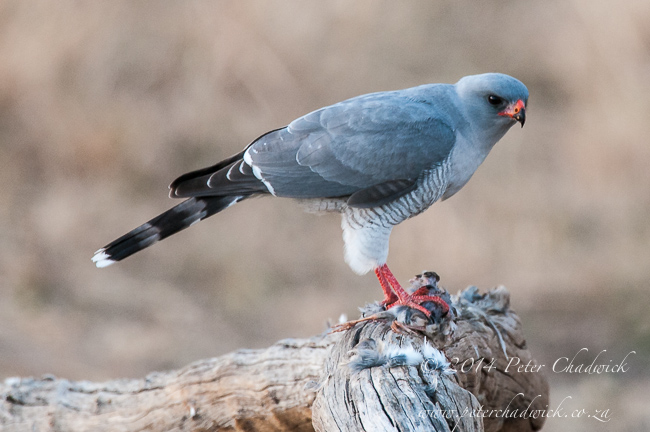 Before even driving through the entrance gate to Madikwe Game Reserve, the birding already started with Marico Sunbird, Chinspot Batis, Long-Billed Crombec and Brubru all feeding in an acacia tree while Kalahari Scrub-Robins fed on the ground below. After being given directions to Motswiri, my family and I were soon eagerly driving ever deeper into the reserve, passing herds of Burchells Zebra, Impala, Kudu and stately Giraffe who looked out over their surroundings with a regal stare. Lilac-Breasted Rollers, Southern Yellow-Billed Hornbills, Magpie Shrikes and pretty Marico Flycatchers all showed themselves along the roads edges and although we could not see any Crimson-Breasted Shrikes, they were regularly heard in the thorny thickets. 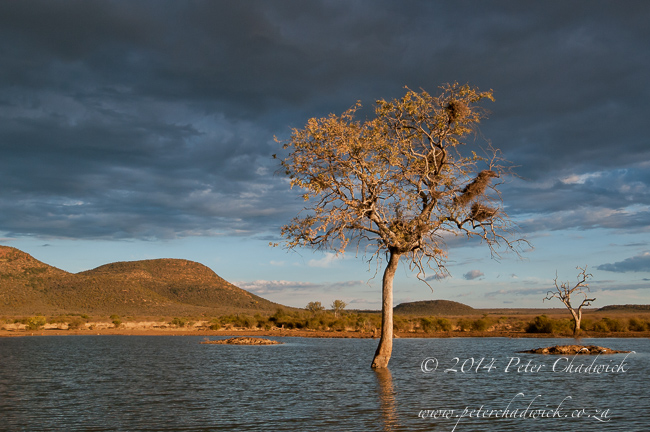 Arriving at Motswiri, we were warmly welcomed with a quenching drink and refresher towels by Zede and Hanri Smit, the managers of the lodge and they soon had us settled into our luxury chalet tucked amongst the Leadwood trees. No sooner had we put our bags down when a small herd of African elephant arrived at the waterhole in front of the lodge and spent several minutes drinking before once again melting silently back into the bush. There was also a constant flurry of feathered activity at the waterhole with the small Blue, Violet-Eared and Black-Faced Waxbills coming down to drink with Green-Winged Pytilia, African Firefinches, Yellow-Fronted Canaries, Golden-Breasted Buntings and African Red-Eyed Bulbuls.

Being ever restless, I could not wait for the afternoon game-drive and so grabbed my binoculars and wandered through the lodge grounds that were protected by an electric fence. In the undergrowth Southern Boubou, White-Throated Robin-Chat, Karoo Thrush, Kurrichane Thrush, Crested and Natal Francolins and African Firefinch were seen whilst above them African Pied Barbet, Crested Barbet, Yellow-Bellied Eremomelas and Orange-Breasted Bush-Shrike were worthwhile sightings. 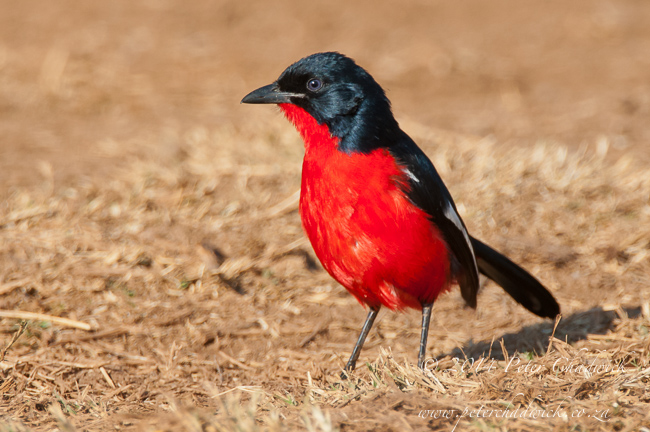 After a scrumptious “high-tea”, we were soon out on game drive on an open vehicle that allowed the wonderful smells of the bushveld to waft through our nostrils and the fresh breeze to pass un-hindered across our faces. First up was a herd of elephants that grazed contentedly and this was quickly followed by a family of four Klipspringer that bounded with ease across the rough bouldered hillsides. A flash of orange produced my first “lifer” of the trip with a female Short-Toed Rock Thrush. High above, a pair of African Hawk Eagles hunted and in the distance a Brown Snake-Eagle hovered over some prey item.

Crimson-Breasted Shrikes then became a regular sighting and their contrasting black and crimson colouring must be one of the most characteristic sights in the arid bushveld. They were often in the presence of Southern Pied Babblers and on one occasion they also formed part of a larger birding party of Black-Crowned Tchagra, Black-Backed Puffback, Red-Billed Buffalo-Weavers and Cardinal Woodpeckers. Rounding a corner, Zede with a gleam in his eye, showed us two well fed male lions that were lying with bellies in the air next to the carcass of an elephant bull. The lions had obviously fed themselves to beyond being full and now lay in the evening sun trying to overcome the stretched limits of their stomachs. In a tree close by, a Black-Shouldered Kite wagged its tail and uttered harsh alarm calls and a Red-Crested Korhaan moved slowly in the long grass oblivious of the two felines lying near by. We were to return on a couple of occasions to this carcass over the next two days and on the last morning were privileged enough to view a Brown Hyena and Spotted Hyena feeding side by side on the massive meal. 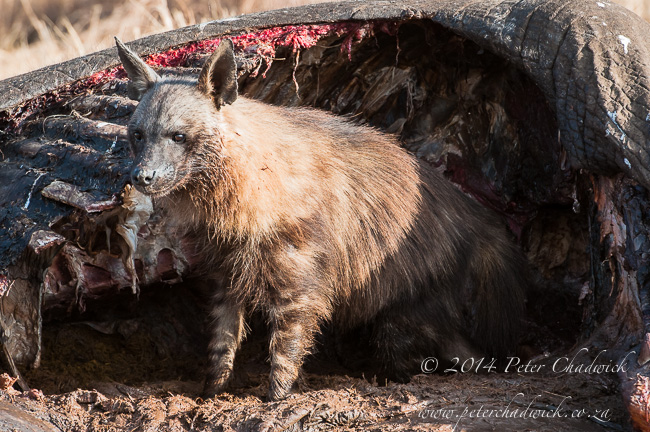 With the setting sun, we headed away from the lions and stopped in a clearing for the compulsory sundowner drink with delicious snacks as the sun placed a pink/purple hue to the clouds and the night birds replaced the day shift. Spotted Thick-Knees and Fiery-Necked Nightjars were soon heard calling in abundance and after saddling up again onto the vehicle we managed to locate both Spotted Eagle-Owl and Southern White-Faced Scops-Owl with the use of a spot light. With time having rushed past so quickly with all of the excitement, we were soon much like the two male lions having fed our bellies and then collapsing into a fitful nights sleep. 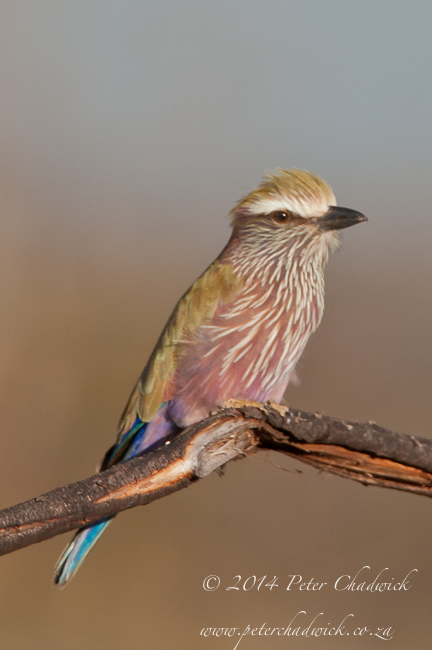 The early morning alarm clock was the welcome sound of francolins and Crowned Guineafowl calling and this quickly roused us and had us clambering to head out once again into the bush. A stop at Tlou Dam was perfectly timed with African Elephant and a large herd of Cape Buffalo all coming down to drink. Egyptian Goose, South African Shelduck, Swainson’s Spurfowl, Three-Banded Plover, Red-Knobbed Coot, Black Crake, Blacksmith Lapwing and Water Thick-Knees were all added to our growing list. These were soon joined by Yellow-Throated Sandgrouse, Burchells Sandgrouse and Namaqua Sandgrouse and this was the first time that I had seen all three sandgrouse species drinking together. 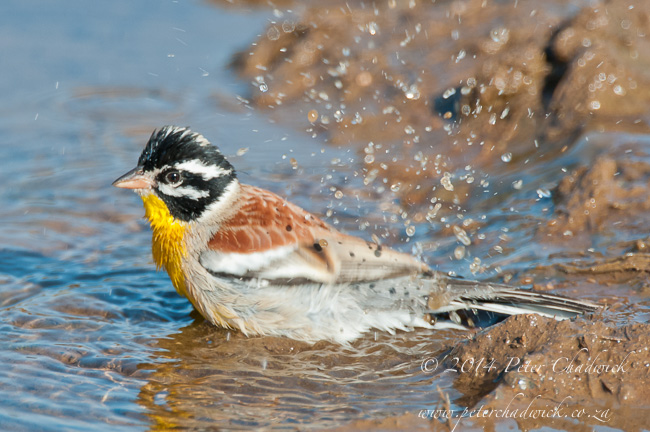 A commotion next to the dam wall had us turning to see where a Gabar Goshawk had caught a small bird and was now plucking at the feathers. Scaly-Feathered Finches hopped about agitatedly, probably having lost one of their group to the small hunter. In the far distance a Southern Pale Chanting Goshawk was easily identified as it sat high in a dead tree. A call over the radio then had Zede sitting bolt up-right and he immediately turned to me to say that the rare yellow-breasted form of the Crimson-Breasted Shrike had been spotted way north on the boundary and he asked if I was keen to go and look for it. Without hesitation we left the dam and drove slowly northwards ticking off Swallow-Tailed Bee-Eater, Southern White-Crowned Shrike, Purple Roller, Black-Throated Canary, Fiscal Flycatcher and Familiar Chat along the way. 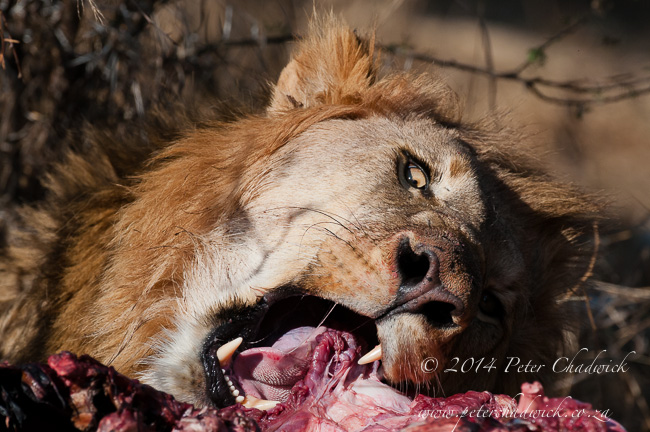 9 of 10: Lion feeding on giraffe carcass.

Arriving in the general area where the bird was last seen we all searched eagerly and were disappointed every time the by now “normal” Crimson-Breasted Shrike was seen. Arrow-Marked Babbler, Pearl-Spotted Owl, Black-Collared Barbet and even a Martial Eagle were scarcely looked at until my daughter spotted the yellow-breasted focus of our attention. Madikwe is reported to have the highest incidence of this unusual form and I was particularly pleased when the bird seemed unfazed by its uniqueness allowing several pictures to be taken of it. Birding and game viewing at Madikwe has to rate amongst the best in the country and I will definitely be heading back to stay at Motswiri to enjoy this special part of South Africa. 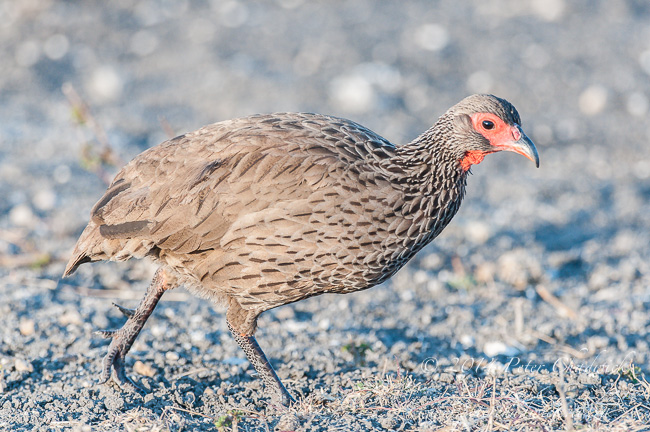 Habitats: Madikwe exists within the transition zone between the dry Kalahari and the wetter lowveld bushveld vegetation. This transition allows for a huge diversity of habitats ad species of all forms. There is also a range of altitudes between the various valleys and hilltops

Getting There: From Pretoria and Johannesburg, follow the N4 through Rustenberg and Swartruggens to Zeerust. In Zeerust turn right on the R47/R49 to Gabarone and Madikwe Game Reserve. It is approximately 90km’s to Abjaterskop Gate of the Madikwe Game Reserve

Accommodation & Activities: Situated in a Leadwood forest on the western side of the malaria free, Big-5 Madikwe Game Reserve, Motswiri Lodge consists of five luxury suites with en-suite bathrooms and outdoor rock showers. There is also a family suite available. Daily game drives are undertaken in the morning and afternoon with knowledgeable guides. The main lodge has comfortable lounges, a bar, extensive deck and swimming pool. A waterhole in front of the lodge is often frequented by game

Reservations: Motswiri Lodge: Tel: 011 818 3718 Email: This email address is being protected from spambots. You need JavaScript enabled to view it. Web: www.motswiri.com