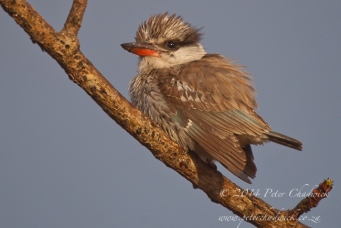 Undertaking a birding trip through Mpumalanga, I travelled from the bustle of Joburg through to Dullstroom and onto Lydenberg and finally ending Nelspruit and with the aim of experiencing the diversity of habitats and species that this area has to offer.

“Paaderplaats” just 12 kilometres outside Lydenberg on the Long Tom Pass was my first destination. I was struck by the peacefulness that the surrounding views allowed me and I immediately started to relax from my long drive. The farm is steeped in history from the early gold mining days through to the Boer War when the Boer Generals, including Louis Botha, used to bombard the British forces in Lydenberg, with their “long tom” guns. Driving through the gate, I was immediately able to tick off my first “special” as a male Gurney’s Sugarbird fluttered with his long tail over one of the numerous Sugarbushes. Greater Double-Collared Sunbirds were constantly being chased between the numerous proteas by vividly coloured Malachite Sunbirds. 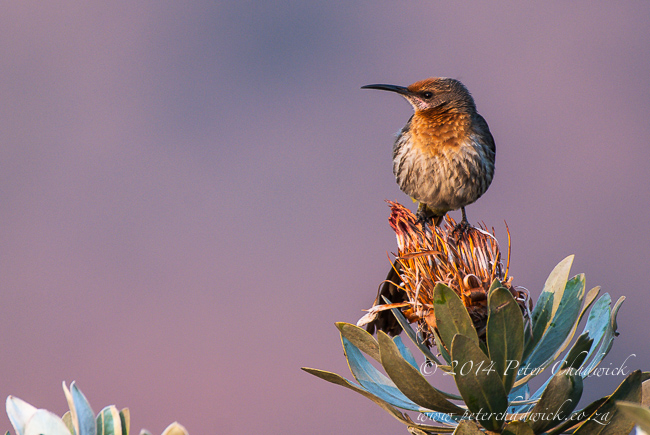 Arriving at this nature lovers retreat with water coming from the mountain streams and electricity being provided for by the sun, the heat of the day was immediately lost in the picturesque valley with the small dam and numerous trees. Friendly Cape Wagtails greeted me on the small bridge crossing the dam and a Cape Robin-Chat fed its ravenous youngster on the lush green lawn, while in the trees Cape Weavers chattered constantly to one another. Alpine and African Black Swifts wheeled in the skies above while Greater-Striped and White-Throated Swallows, just returned from their winter migration, collected mud to build their nests. Drakensberg Prinias moved amongst the bushes together with Cape White-Eyes and Common Waxbills, while on the dam’s edge, dragonflies were plentiful. Around the homestead, a pair of Cape Rock Thrushes sat on the gables and launched attacks onto insects below on the ground. 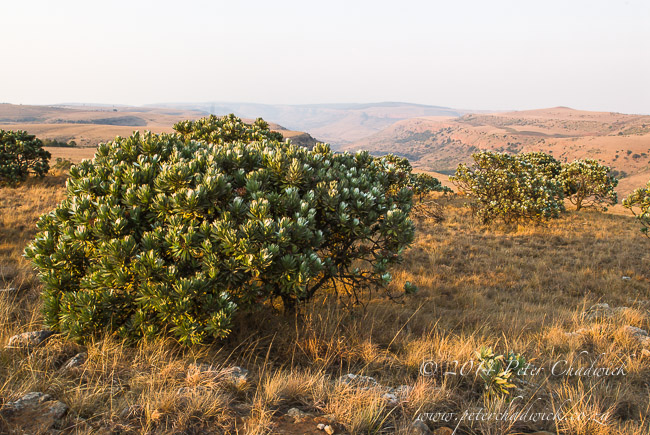 2 of 7: Protea bushes on the Lydenberg Escarpment.

After offloading my luggage, I climbed one of the nearby ridges, passing Capped Wheatears that obviously had young hidden nearby as the pair ferried a constant supply of food. Far off, a Jackal Buzzard called from the krantzes and a Rock Kestrel hovered over an unseen prey item. Buff-Streaked Chat pairs hopped amongst the boulders together with a lone Familiar Chat and later as I watched the sun sink while sitting high up on one of the cliffs overlooking the striking valley I was able to delve deep into my soul and reflect how privileged I was to be in this special place. 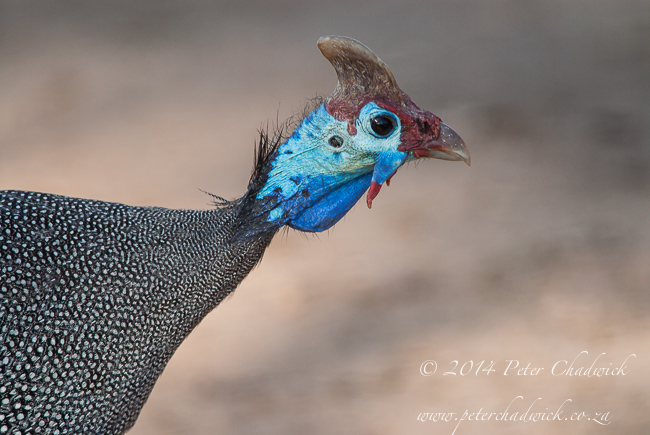 I arose early the next morning and after a scrumptious breakfast and brief drive around the property, where I was lucky to sight a pair of rare Oribi and three Denham’s Bustard’s strutting purposefully across the high grasslands, I was on my way through to Schoemanskloof and “Old Joe’s Kaia”, which is nestled just off the road to Nelspruit. The drive passed Kwena Dam and around its edges African Wattled Lapwings searched for food amongst the recently burnt grasses, while Black-Headed Herons stood motionless awaiting a passing morsel. A hunting Green-Backed Heron, Southern Bald Ibis’s, Red-Capped Larks and Kittlitz’s Plovers were also viewed in and around the vicinity of the dam. 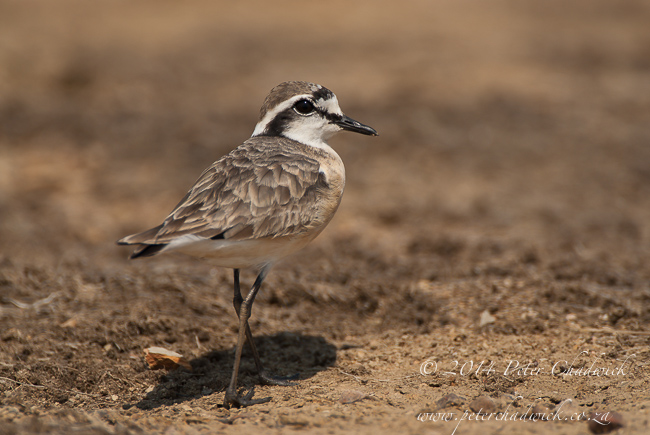 At “Old Joe’s”, Marico, Amethyst, Scarlet-Chested, White-Bellied and Collared Sunbirds greeted me by flitting through the garden spray in dazzling displays of colour. Red-Capped, White-Browed and Chorister Robin-Chats sang from the undergrowth with beautiful liquid calls and in the well vegetated gardens African Paradise Flycatchers were everywhere. Kurrichane Thrushes scuttled amongst the leaf litter in search of insects, occasionally being joined by Terrestrial Brownbuls, whilst in the branches above a small family group of Southern Black Flycatchers moved constantly searching for insects to feed on. 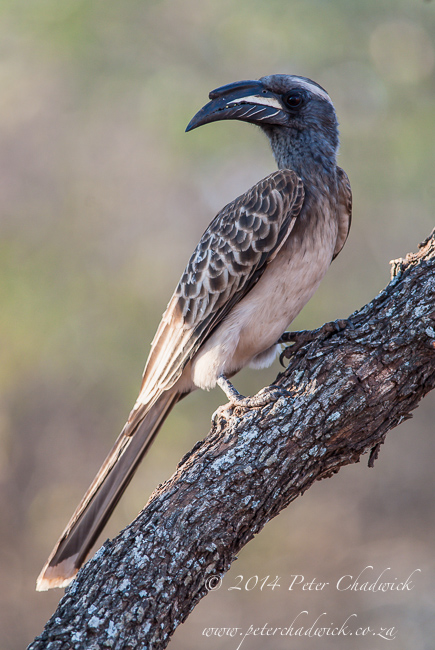 A walk down to the river through the Albizia woodland was well worth it, as not only were birds numerous, but butterflies and dragonflies showed off in an assortment of colours. On the side of a path a large Snouted Cobra sunned itself, retreating quickly into cover on my approach and a pair of Side-Striped Jackal dashed across the path. A porcupine stuck its nose out briefly from its den in an old causeway under the track, before retreating back out of sight. Grey Go-Away-Birds called from trees tops with their very distinctive namesake call. Birding parties were everywhere being made up of Fork-Tailed Drongo, Brubru, Grey-Headed Bush-Shrike, Black-Backed Puffback, Chinspot Batis, Long-Billed Crombec and Southern Masked and Village Weavers. In the thick riparian vegetation Black-Collared Barbet, Purple Created Turaco and African Green-Pigeons fed on ripening fruit. A pair of Golden-Tailed Woodpeckers moved purposefully up the branches of a dead tree, stopping occasionally to drum into the dead wood until a tasty morsel was reached and pulled out with their tongues. Grey Hornbill pairs flew between trees and after following them for a while, I watched as they flew down to the ground to scratch amongst the cow dung with their long bills, flicking up hapless insects which were immediately swallowed. Cape Glossy Starlings and Little Bee-eaters perched high in the branches glistened iridescently as the sun caught their blue, green feathers. 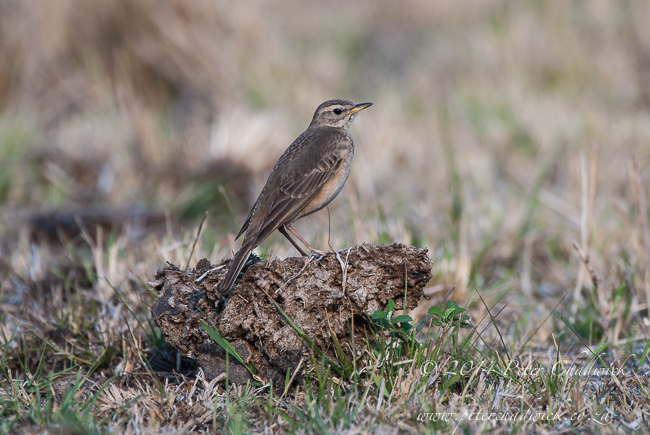 Returning to my accommodation via an open patch of grassland a Common Fiscal surveyed all from its high perch and looked down onto a Groundscraper Thrush scurrying alongside a Plain-Backed Pipit and a small mixed flock of Cattle Egrets and Helmeted Guineafowls. The presence of an African Scops-Owl was given away by an Orange-Breasted Bush Shrike which was alarm calling loudly and hopping continuously around the well camouflaged owl. All too quickly I had to pack my bags and move on and in the short time that I was at “Old Joes Kaia” I was amazed at the diversity of habitats and accompanying birds that I was able to view in such a small area. 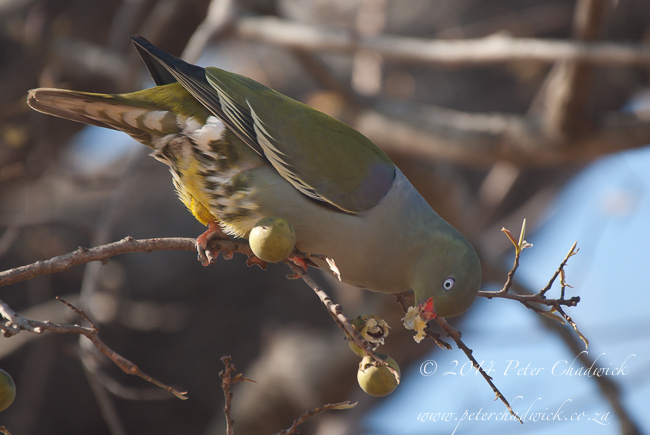 Season and weather: Mpumalanga falls within the summer rainfall area with hot to very hot summers and mild winters. The highveld areas can become very cold in winter

Habitats: The Mpumalanga Birding Route is extremely rich in its diversity of habitats which range from high altitude mountain fynbos and grasslands through to riparian forests and scrub savannah. Wetlands and rivers abound in the area.

Accommodation & Contact Information:
Paaderplaats / Dullstroom Tel: 082 4161379 email: This email address is being protected from spambots. You need JavaScript enabled to view it.

Getting There: Birdlife South Africa has a well designed brochure providing details of birder friendly accommodation with the routes to the various locations. This may be obtained through www.mpumalangabirding.co.za or via email at This email address is being protected from spambots. You need JavaScript enabled to view it.