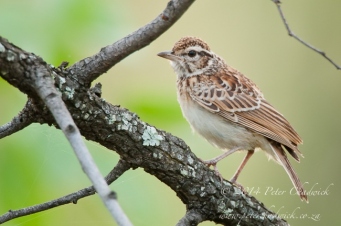 It is as though Polokwane is the central point from where all bushveld birds radiate outwards with eastern species overlapping with western species and northern species meeting their southern counterparts.

David Letsoalo and I rose way before the dawn to leave Kurisa Moya and head on our way to Polokwane Game Reserve as part of my journey through the Limpopo Province. I remember traveling through Polokwane as a young boy and was always eager to get to this special place which always seemed to have better birds than anywhere else. 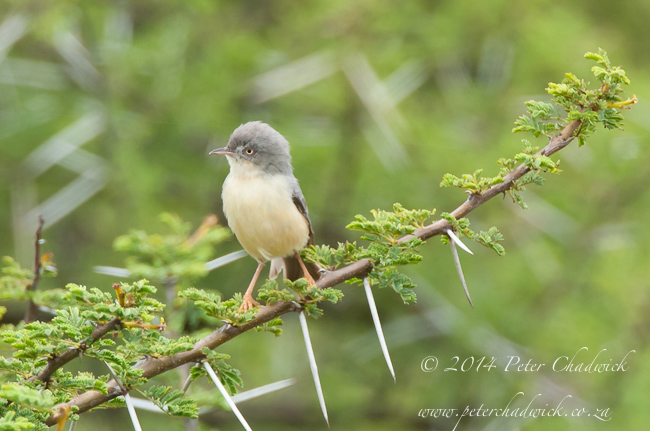 On our drive from Magoebaskloof, David and I stopped at various heavily grazed grasslands where we tried to add some of the more difficult to identify non-descript brown larks, pipits and cisticolas to our list. Southern Bald Ibis where also a highly sought after target to be found, but alas avoided us totally and so we concentrated on getting to Polokwane Game Reserve as the gates opened and where we would meet with Joe Grosal from Eden Routes Eco-Safari’s. Joe knows the Polokwane area intimately, having worked in the region as an ecologist for many years and before setting up his current business that he runs with his wife. He is also an active driver of the Polokwane Bird Club and regularly holds courses in bird identification and leads mist-netting trips for research and monitoring purposes. 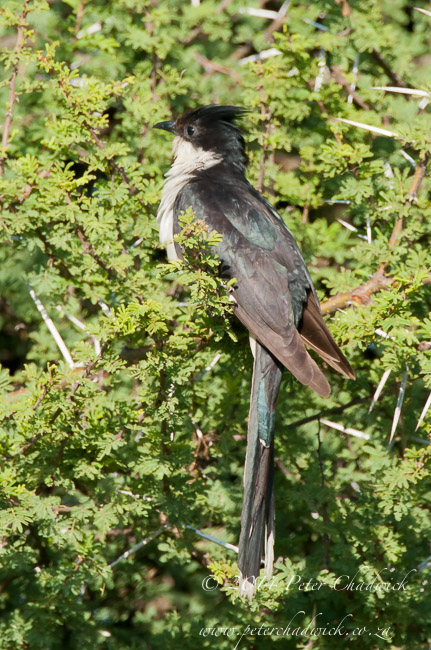 We arrived slightly earlier than planned and parked our vehicle, grabbed our binoculars and wandered through the campsite at the entrance to the game reserve. African Palm Swifts were swooping the skies above together with Little and White-Rumped Swifts. Barn Swallows, Greater-Striped and Red-Breasted Swallows also flew with them but at a much more sedate pace than the fast flying swifts. A Fiscal Flycatcher pair moved systematically along the tree line, stopping occasionally to swoop down onto an insect and at one point the similar looking and much larger Fiscal swooped in and bullied the flycatchers away from a large grasshopper that they were trying to subdue. White-Browed Sparrow-Weavers sung melodiously from the dry acacias trees and a Common Scimitarbill took most of our attention as it moved along the tree trunks prizing small morsels from underneath the bark. 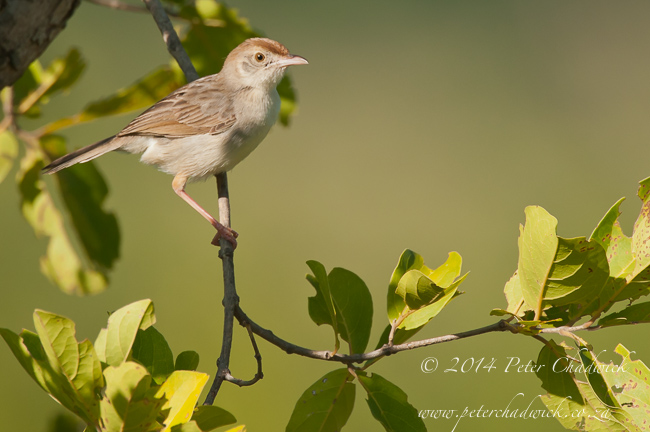 With Joe’s arrival, and after warm greetings, David and I made ourselves comfortable in the open landcruiser and we were soon heading through the boom gate and into the heart of the reserve. We had hardly traveled a hundred meters when a family of Burnt-Necked Eremomelas was sighted and we spent several minutes watching as they moved through the acacia thickets, constantly calling to one another. Next up was a mixed flock of Black-Faced, Violet-Eared and Blue Waxbills that fed on the ripe grass seeds that had fallen on to the ground, while above them a male Great Sparrow sang with a harsh call that only a female sparrow would appreciate. 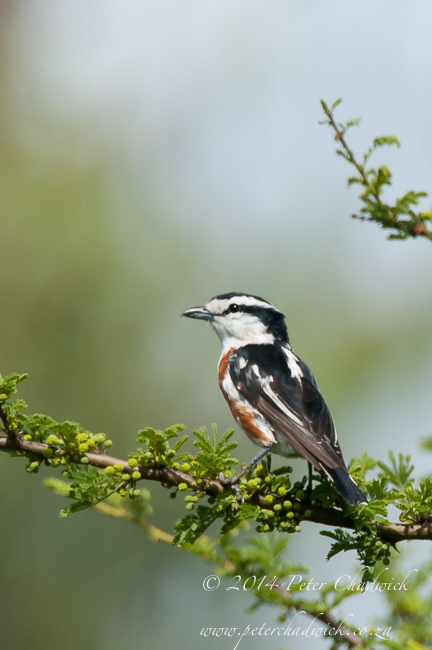 As we drove, Joe knowledgeably and passionately talked about the ecology of the reserve, saying that it was one of the last remaining patches of the Pietersburg Plateau False Grassland with most of the rest of the landscape having been transformed by agriculture. This made it imperative that this relatively unknown gem of a reserve was protected and supported. Sadly, the local municipality is battling with finding sufficient funds to run it and there are constant threats from mining. 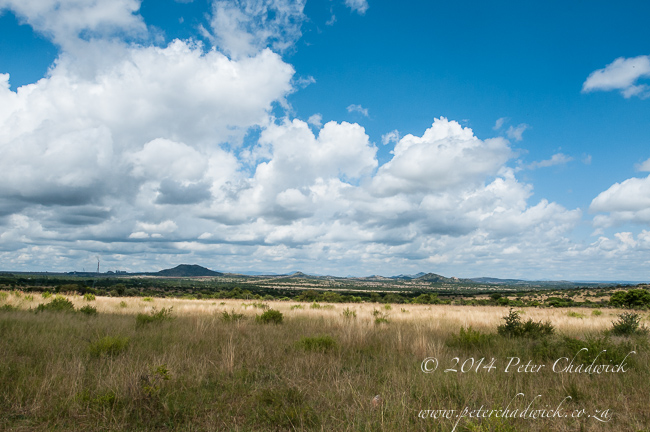 Rounding a corner we were in the middle of a mixed herd of Giraffe, that plucked leaves with an aloof manner from the crowns of the acacias and Burchell’s Zebra that grazed the lush grasses. Nearby, a small herd of Kudu stood protectively around a very young calf that looked inquisitively out on its new world with large brown eyes. A short distance further on we stopped the vehicle and the bush was absolutely alive with bird calls. Soon a pair of Crimson-Breasted Shrike hopped across the road and this heralded the start of a birding party that included Southern Black Flycatcher, Marico Flycatcher, Magpie Shrike, Southern Yellow-Billed Hornbill, Cape Glossy Starling, Brubru, Black-Collared Barbet and a lone male Marico Sunbird. A pair of Wahlberg’s Eagle flew in high circles that attracted attention from a Jackal Buzzard who attempted a few half-hearted stoops on the eagles before continuing on its way. 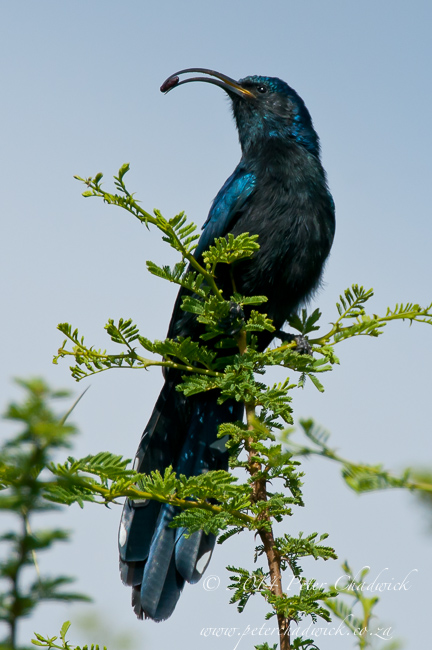 Next stop was one of the picnic-sites and this allowed us to stretch our legs and had me out with my camera trying to creep up on the Kalahari-Scrub Robins that Joe was trying to call closer by mimicking a Pearl-Spotted Owl. Swainson’s Spurfowl, Crowned Lapwing, Cape Turtle Dove, Groundscraper Thrush and African Hoopoe wandered the lawns and from the Acacia trees, Brown-Hooded Kingfisher and Fork Tailed Drongo launched after prey. Jacobin and Diderick Cuckoo’s were both present and sat preening while a Grey Go-Away Bird called loudly in alarm at our presence.  Acacia Pied Barbets were heard close by and a short search also produced Crested Barbet, Southern Boubou, Golden-tailed Woodpecker, Scaly-Feathered Finch, Chestnut-Vented Tit-Babbler and Cape Penduline-Tit 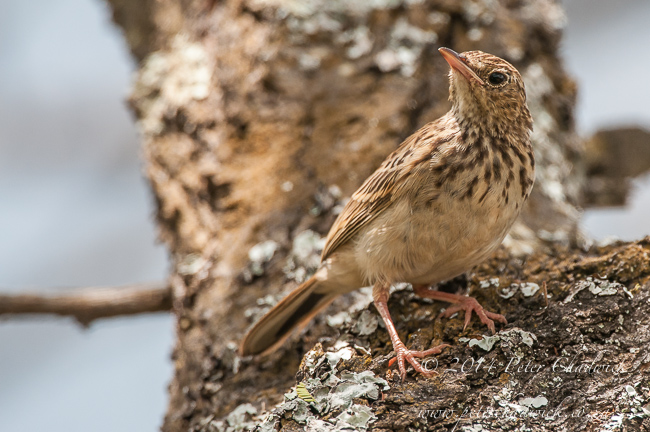 With time marching on, Joe suggested that we drive to the other side of the reserve and towards its crown where we would attempt to find one of the reserves real specials – the Short-Clawed Lark. The slow drive took us through more herds of Burchells Zebra, Red Hartebeest and Tsesebe and at a small waterhole a lone Blue Wildebeest quickly quenched its thirst before galloping off. Below the power-lines that transect the reserve we found Northern Black Korhaan and a flock of Crowned Guineafowl that obviously had had a good year considering the large number of young that were with them. A Black-Chested Snake-Eagle used the height of the power lines as a vantage point and nearby a Brown Snake-Eagle also perched in a dead tree. 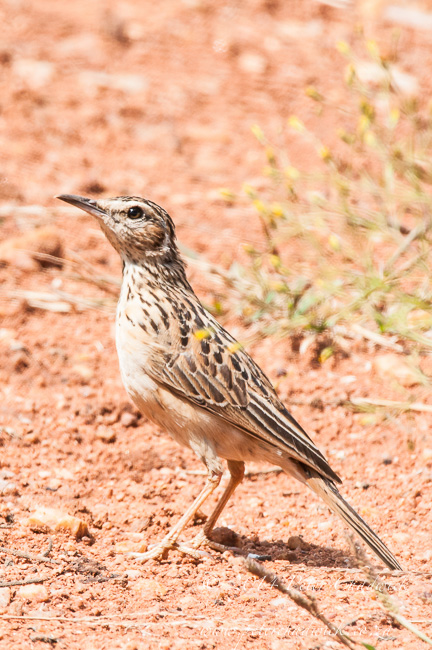 Crossing through a marshland we dared not stop for fear of getting the vehicle stuck in the dark mud, so we snatched quick views of Black-Throated Canary, Red-Collared Widowbird, White-Winged Widowbird, Black-Chested Prinia, Long-Tailed Paradise Whydah and a Shaft-Tailed Whydah. We then systematically searched each grassland patch and although we found Rufous-Naped Lark, Sabota Lark, Desert Cisticola, Tinkling Cisticola and Coqui Francolin the Short-Clawed Larks avoided us. 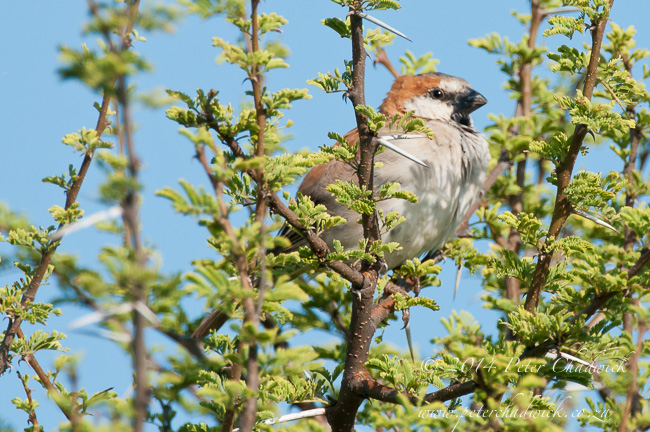 With only one remaining patch to search and mentions of “it is rather late in the season to find them” Joe stopped occasionally and tried to call the elusive larks up by expertly imitating them – but still nothing! With a final walk through the grasslands, we turned and headed for the entrance gate. Barely 50 meters down the track, David suddenly yelled out to Joe to stop the vehicle and there in front of us was a Short-Cawed Lark that posed beautifully in the open before flying off and disappearing into long grass.  Typically, thereafter we sighted several other birds and were also fortunate to see a recently fledged Bushveld Pipit that sat perfectly in the fork of a large tree, allowing us to photograph it.  Back at our own vehicle and ready to head off to Nylsvlei, I reflected that Polokwane had again lived up to my childhood memories as being a top birding site and I committed then to return again, this time promising to spend several days in the area. 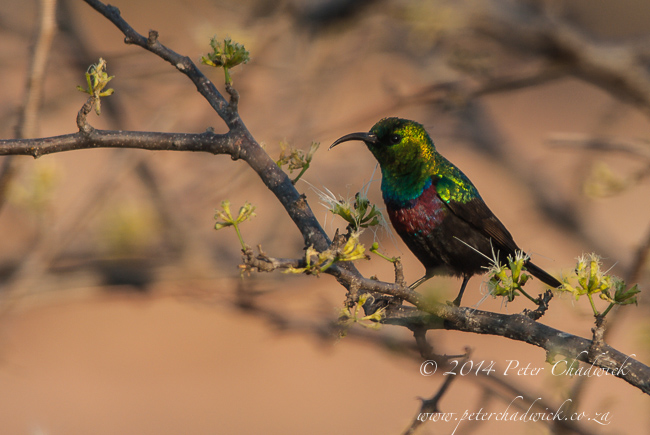 Season and weather: Situated at around 1300m above sea-level, the Polokwane Game Reserve is very dry and hot. Late afternoon thunderstorms can be expected during summer months, while winters are generally mild with cold evenings and nights

Habitats: The area is characterized by open savannah with scattered Acacia and broadleaved trees. Granite outcrops and riverine thickets add to the habitat diversity. There are also open areas of grassland that are critical to a number of lark, pipit and cisticola species

Getting There: From the N1, turn onto the Tzaneen by-pass road (R71/R81). Turn right onto the Silicon Road at the second intersection and travel on for another 800m. The reserve entrance is on the right

Accommodation & Activities: There is an extensive road network within the Polokwane Game Reserve that allows visitors the ability to easily traverse the diverse habitats on offer. In addition walking trails and bird hides are also available. At the entrance gate there is a camping ground and caravan park as well as comfortable chalet accommodation.

Lure of the Kgalagadi
Reviewed by Richard Robinson
"At this moment, only dreams, but it is on my..."

Mating Dance of the Pied Avocet
Reviewed by Wim de Klerk
"Great sequence! Great photography! Can't wait to get to the..."