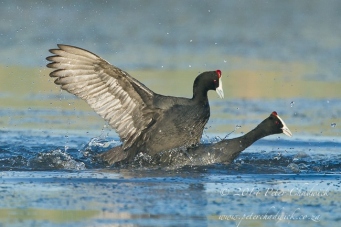 “Eish you are VERY early,” the security guard at the entrance gate to Marievale Bird Sanctuary said while having a huge stretch and stifling a yawn after he had stood up from an extremely rickety looking plastic chair that was half hidden in the shadows of his security hut. He was not far off the mark, as only the very first hints of a change between night and day were starting to touch the horizon.

Starting my journey from the other side of Joburg and expecting the usual rush of traffic, I had departed at 4 am, only to find the highways pretty much clear of vehicles. This allowed me an easy trip to arrive on the outskirts of Nigel where this well-known Ramsar site is situated. I had last visited the sanctuary over twenty years ago and was thus extremely eager to get through the gate and onto the birding hides, but it was only as flying skeins of Fulvous Whistling Duck and Spur-winged Geese barely became visible in the orange tinted sky that the security guard finally unlocked the padlock allowing me access. 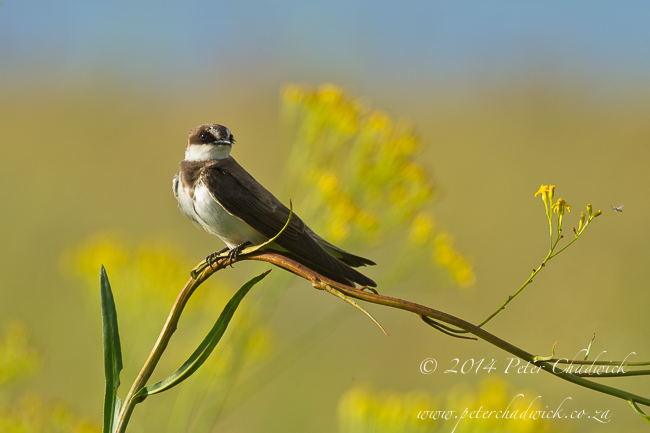 Cape Sparrows and Speckled Pigeons huddled around the buildings, trying to catch spots of warmth as the sun crossed over the horizon to cut through the light mist that was hanging over the whole area. Passing through the administrative block, I drove onto a rough dirt track, where Common Reedbuck could be seen feeding in the neighbouring farmlands with Glossy Ibis wading in the puddles in the road and Blacksmith Lapwings scolding them loudly if they came too close.

My first stop was at the Hammerkop hide, which is probably the most popular for bird photographers, as a series of natural looking perches have been placed close by and where brightly coloured Malachite Kingfishers were the star attraction. Despite being so early, three other photographers had already set themselves up with their long camera lenses pointing in anticipation of the arrival of the first birds. As we all waited for the light to improve sufficiently for photography, we watched Greater Painted Snipe, African Rail and African Swamphen feeding on the edges of the reed-beds. Black Crake and Little Bittern soon joined these usually reclusive species.

Further out in the open water, Yellow-Billed Duck were plentiful together with Egyptian Geese, Red-Billed Teal, Common Moorhen and Cape Shoveller. The countless Red-Knobbed Coots that were feeding amongst the water-weed exploded in to action occasionally as viscous fights broke out between birds, resulting in much wing thrashing, clawing and pecking of one another. White-Winged Terns made regular patrols over the wetland, stooping down onto the waters surface to snatch up a tasty morsel. Higher in the sky, an African Fish Eagle also cruised by and shortly afterwards a Yellow-Billed Stork followed the direction of the fish eagle. African Marsh Harriers quartered back and forth over the reed-beds and caused much consternation as they flew too close to the waterbirds which then scattered in different panicked directions.

Lesser-Striped Swallows and White-Throated Swallows zooted at high speed in and out of the hide together with their recently fledged youngsters making us flinch and duck out of the way of their aerial antics. Lesser-Swamp Warblers, Southern Masked Weavers and African Reed Warblers also kept us entertained as they fed in the reed-beds directly in front of the hide.

In a flash, an adult and a juvenile Malachite Kingfisher arrived to sit on the carefully placed perches and the row of expensive cameras exploded into action like a row machine guns opening up on an enemy target and in the space of a few seconds hundreds of pictures had been captured to digital memory cards. Ignorant of their fame, from the “paparatsy”, the two small kingfishers preened themselves and then settled down to the seriousness of trying to catch breakfast. Watching the water below intently, they made repeated dives to catch small aquatic insetcs and tiny fish that were first beaten before being swallowed head first, much to the delight of the photographers. After a few minutes the kingfishers flew off and with them went the other photographers who had achieved their goal of the day.

Deciding to stay on in the hide for a while longer, I watched as Squacco Herons ventured out onto the water weed, where they would stand motionlessly until something caught their attention and they would then dance after their intented victim with long strides and half open wings. My paitience was rewarded when a lone Spot-Necked Otter cruised slowly past the hide, ducking down and re-appearing amongst the by now very nervous Red-Knobbed Coots. Only when the otter had disappeared from sight did I decide it was also time for me to explore the sanctuary further. 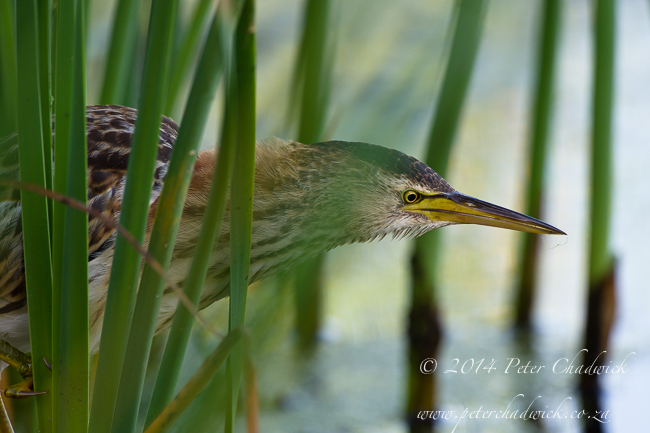 Driving through lush grasslands and thick reed-beds, I flushed a Grey Duiker that bounded off immediately and in the process also flushed an African Crake that landed momentarily on the road before itself scuttling back into cover. Yellow-Crowned Bishop, Southern Red Bishop, Long-Tailed Widowbird and Red-Collared Widowbirds were plentifull amongst Le Valiiants Cisticola and Common Waxbill. Entering a more open area of grassland, African Wattled Plover pairs fed together with a small flock of Crowned Lapwing. Cape Wagtails and Cape Longclaws walked un-phased between the larger lapwings and snatched small insects from grass stalks. 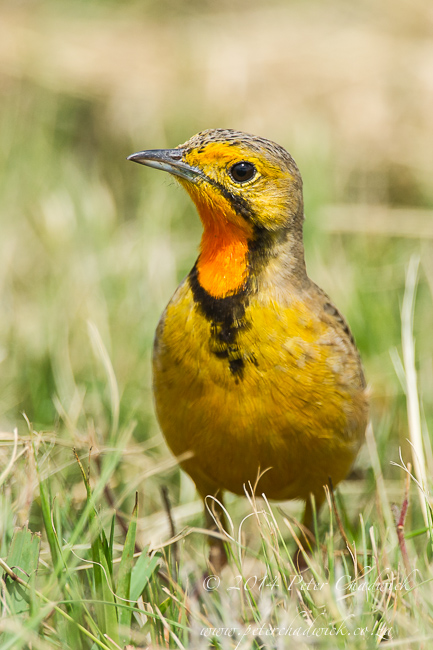 Stopping at the Duiker Hide, A group of very serious twitchers were having a heated debate over the call of an unseen warbler, with the one individual pushing hard for it to be a species which he could then add to his life list. Ignoring the debate, I settled down in the hide to watch a Goliath Heron and Purple Heron have a brief squabble over a patch of open water amongst the thick reeds, with the smaller Purple Heron having to make the obvious move to a new hunting area. African Darter, Reed Cormorants and White-Breasted Cormorants sunned themselves on a dead tree and Little Egrets stood paitently in the shallows and on the nearby casueway. Also present on the causway was a pair of Giant Kingfishers that flew off calling loudly as I approached to cross over the flowing stream of water.

Back in my vehicle again, I was passed by a group of mountain bikers that were using the reserve to increase their heart rates and for some social exercise, ignoring the vast array of birdlife around them. A large patch of grass aloes that were in flower had attracted a flock of Helmeted Guineafowl and Swainsons Spurfowls that were scratching and kicking up dirt at the base of the aloes. Pied Starlings and Cape Turtle Doves sat in large flocks in the dead pine trees and high in the crown of one of the trees, a Common Fiscal mobbed a Black-Shouldered Kite. Leaving the waterways behind me and heading towards the weathered remenants of the mine dumps, I stopped to watch Little and White-Rumped Swifts wheeling in the skies above, while below them European Bee-Eaters, Banded Martin and Brown-Throated Martins swopped low over the grasslands. Having reached the end of the road network, I retraced my steps past the grasslands and wetlands, stopping again at the Hammerkop Hide. Despite all of the feathered action of earlier that morning, all was now extremly quite as the sun neared it’s highest point and familes were deeply engossed in the weeknd braais on the open lawns of the picnic areas.

Season and weather: Marievale has a typical Highveld climate with approximately 700m of rain falling per annum and mainly during the summer months. Frost occurs regularly at night during winter months

Habitats: The Marievale Bird Sanctuary is situated within the wetland area of Blesbokspruit Ramsar site. The sanctuary extends over 1000ha with open grasslands, reedbeds and open water.

Getting There: Head south from Johannesburg on the N3 highway and take the R550 off-ramp. Turn left and follow this road for 20km’s. Turn right at the T-Junction and pass through Nigel. The reserve is signposted with the entrance being on the right-hand side of the road.

Accommodation & Activities: With this location being extremely popular it is advisable to arrive early in order to find a good position at the various hides. Most hides have perches set up in front of the hides that attract Kingfishers and Swallows as well as Reed Cormorants and African Darter. The Hadedah hide is probably the best-placed hide for bird photography in the morning with Shelduck Hide being best in the afternoons. Overnight accommodation is available in the form of two fully equipped self-catering chalets sleeping four people.