Gauteng is the undisputed heavy weight champion of South Africa when it comes to the economic driving force of the country and this brings with it a fast paced lifestyle - which has me as a small town “dorpenaar” cringing in the corner and looking for slower and more peaceful spots. Fortunately, one does not have to look far from the shopping malls and speeding highways that interconnect these credit card munching malls to find a whole suite of wild islands where birdlife is still plentiful.

Unfortunately though, many of these spots are indeed becoming smaller and smaller islands separated from one another as development creeps ever closer and gobbles ever more of the wild spaces. We as society should be stopping some of this encroachment so that these special spots are protected for perpetuity and so that we have the opportunity to escape and return to gather soul-food and realise our own need for space and need for nature. 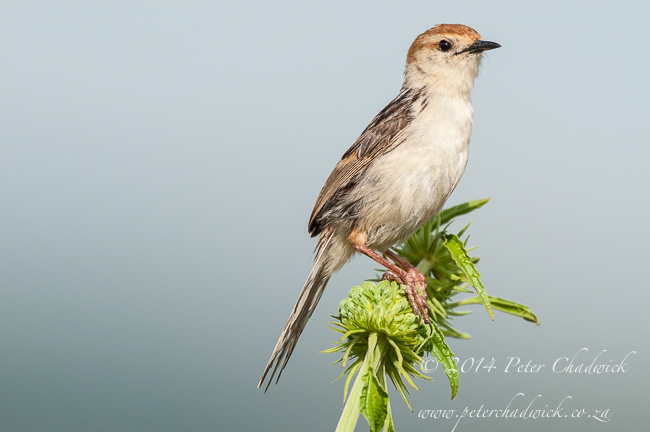 One of these special spots that I recently discovered is Maropeng. It is part of the larger Cradle of Humankind that also includes the Sterkfontein Caves and is situated within an easy 45-minute drive from the high-speed lifestyles. Maropeng holds breathtaking views of the Witwatersberg and Magaliesberg ranges and from here, hot air balloons can be seen rising above the veld in early morning mists and then drifting lazily over the landscape.  Although it is not that large an area, Maropeng holds an exciting variety of life amongst its lush grasslands and wooded copses and can easily keep one occupied for a good mornings birding followed by a tour through the Tumulus Dome, where our path to becoming an upright walking homo-sapien is well documented. 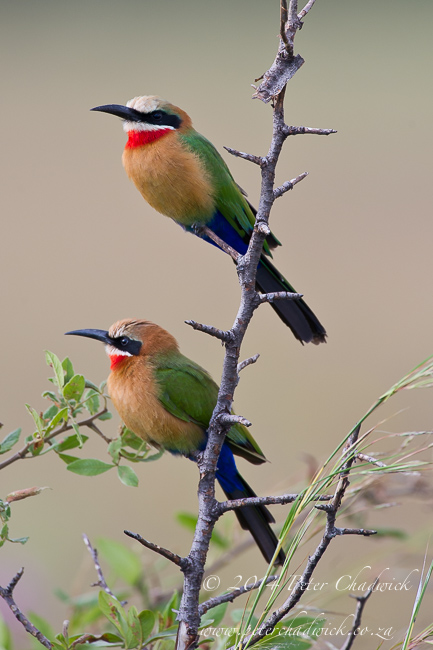 My welcome to the small reserve was rows and rows of Amur Falcons that sat along the power-lines with the males and females contrasting against one another with their differing plumages. As the day warmed, they all flew off to hawk and drop onto small insects. Flocks of Greater-Striped Swallows and Little, Black and White-Rumped Swifts weaved in and out with high-speed precision between the larger Falcons, also scooping insects from the air. In a woodland patch a Crested Barbet was giving its rather grating call and a Cardinal Woodpecker was located by its continual tapping against a dead branch. On the ground below, a Groundscraper Thrush pair flicked leaves and small twigs to reveal tasty morsels that were quickly snatched up. In patches where the grass was short or had been mowed for heritage events, Blacksmith, Crowned and African Wattled Lapwings walked with jerky stop-starts to pluck at a food item whilst more boisterous flocks of Crowned Guineafowl chased one another in flurries of feathers and scratched enthusiastically in the dirt, kicking dust in every direction. Shy Swainson’s Spurfowls dashed across these openings to disappear again into the safety of the longer grass. Also amongst the short grasses African and Buffy Pipits were regular sightings and had me checking the differences to these rather difficult to identify drab brown birds. 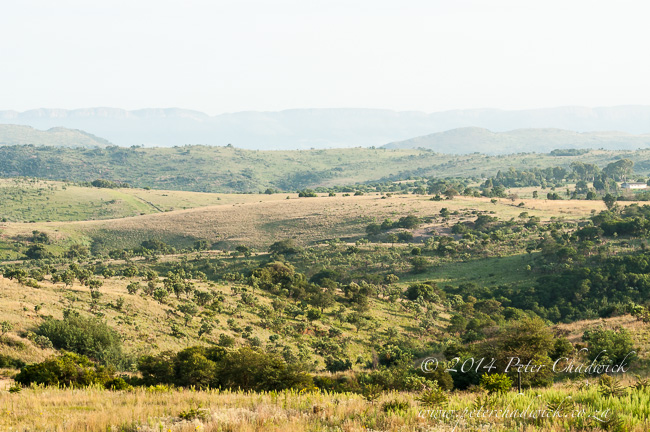 On driving further around the area, I found a pair of Bokmakierie’s that was sitting on a shrub calling in perfect duet. Close-by, raucous Pied Starlings, a pair of Anteating Chats and a Cape Longclaw were searching for food alongside one another and between a spread out flock of African Quail Finches. Over the long grasses themselves, Long-Tailed and Red-Collared Widowbird males displayed with long draping tails and a male Pin-Tailed Whydahs harassed a flock of female whydahs. A flash of golden colour drew my attention to a Yellow-Crowned Bishop, which is a small bird that I have not seen for many years and was particularly pleased to see once again. After this initial flurry of birding I took a break to do the tour through the Tumulus Dome and then have a bite to eat at the small boutique hotel. On the drive out of the reserve I was rewarded with European Bee-Eaters calling distinctively in the skies above as a Black-Shouldered Kite hovered and then swooped down on a hapless rodent. By now Rufous-Naped Larks were displaying on every available raised point and I spent an enjoyable ten minutes watching as they called and then hopped and flittered their wings rapidly in display, with intermittent distractions when I watched the small flock of White-Fronted Bee-Eaters feeding nearby. 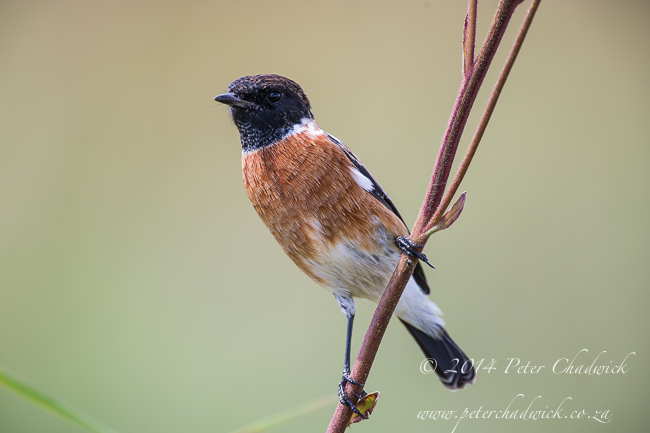 En-route back towards Randpark-Ridge where I was staying, the signs to the Walter-Sisulu National Botanical Garden caught my attention and I was reminded of the Verreaux’s Eagle pair that is well known and also of recent reports of unusual sightings of a Grey Wagtail. This quickly made my decision and I was soon wandering the extensive gardens in search of additional feathered delights and passed picnicking families and a large group learning the basics of photography. At the SASOL Bird Hide, Southern Red Bishop males swayed on the wind blown reed stems and Lesser-Swamp Warblers flittered in and out of cover. A lone Malachite Kingfisher sat briefly and then took off in a flash of vibrant colour to a quieter spot on the dam’s edge. African Black Duck and Yellow-Billed Duck pairs preened contentedly on the far side as a Little Egret waded slowly and patiently in the shallows. Both Diderik and Klass’s Cuckoos were sighted and in the woodlands along the river, Red-Chested Cuckoos also burst from cover as I approached too closely. Kurrichane and Olive Thrush moved slowly on the ground in amongst the shadows of the woodlands and in the branches above Cape Glossy Starlings, Bar-Throated Apalis, Cape White-eyes, African Paradise-Flycatchers, Brubru, Black-Backed Puffbacks and Southern Masked-Weavers moved together in a birding party. 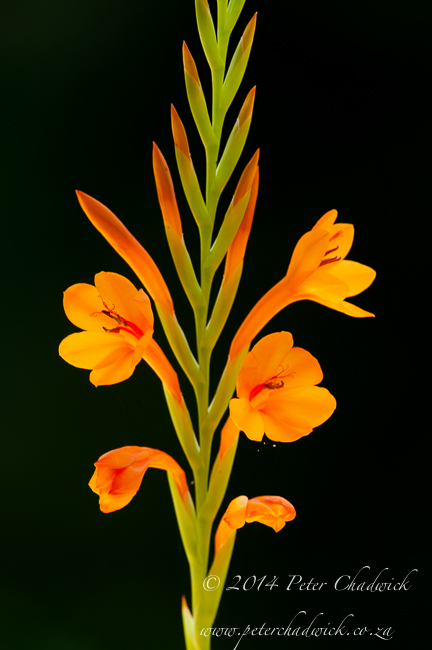 5 of 7: Red Watsonia flowers in the Walter-Sisulu National Botanical Garden.

Wandering along the rivers edge, I passed numerous other birders with cameras at the ready and all in search of the elusive Grey Wagtail. As I walked, Giant Kingfishers flew nosily up and down the river as Hadedah’s also erupted from the sodden edges of the riverbank. African Olive-Pigeons fed in the crowns of the fruiting trees and Amethyst Sunbirds plucked at spider’s webs. Nearing the large fast flowing waterfall, I slowed down and watched patiently in hope of viewing the gardens most famous residents. It was not long before the calls of a Jackal Buzzard averted my gaze over to the west where I not only saw the calling bird but watched as it dive-bombed the Verreaux’s Eagle pair. If this was not enough a Steppe Buzzard joined in and an African Harrier-Hawk also flew past with an African Goshawk close on its tail. On the cliffs next to the waterfall, Red-Winged Starlings flew in and out of the cracks and a Cape-Rock Thrush male sat on a pinnacle. At the base of the waterfall, the large trees were in full fruit and Grey Go-Away Birds gorged themselves together with Black-Collared Barbets and Dark-Capped Bulbuls and Sombre Greenbuls. 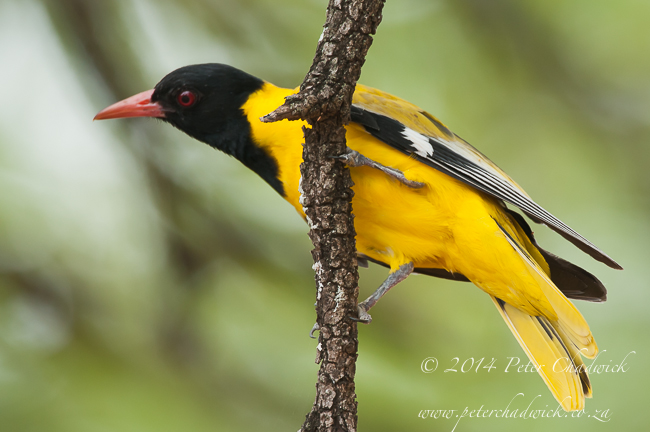 Without even realising it, the lengthening shadows of dusk were soon falling and I had passed an exciting day’s relaxing and rewarding birding within the close confines of South Africa’s fasted paced City. As for the “mega-tick “ sighting of the Grey Wagtail it eluded all of us crazy birdwatchers and photographers that day but I was to catch up with it at another equally special birding destination in the very near future.

Season and weather: The two sites mentioned have a typical highveld climate with approximately 700m of rain falling per annum and mainly during the summer months. Frost occurs regularly at night during the winter months

Getting There: The Walter-Sisulu National Botanical Garden is located towards Roodepoort on the western Bypass and from there follow Hendrick-Potgieter road towards Tarlton. The gardens are well signposted from here on. Maropeng is situated on the R400 just off the R563 Hekpoort rd

Accommodation & Activities: Within the Maropeng – Cradle of Human Kind is the Maropeng Hotel which is a four star 24 bed boutique hotel. Apart from the birdwatching it is well worth a visit to the Tumulus Building at Maropeng which has numerous displays about human- kind’s origins. Occasional other activities such as photographic and bird identification skills are regularly advertised in local newspapers.

Reservations: Maropeng Hotel: Tel: 014-5779100 Email: This email address is being protected from spambots. You need JavaScript enabled to view it. Web: www.maropeng.co.za