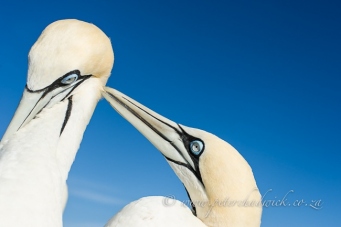 I am often asked which my favourite wildlife photographic experience has been. It is then expected that I mention something that renders from the bushveld where the "Big Five roam - something like the wildebeest migration in the Serengeti or watching a pride of lions pulling down a large Cape buffalo bull – the stuff that Africa is made of!

Invariably, my response gets a few strange looks as I mention that it is photographing on Malgas Island at the entrance of Saldahna Bay in the West Coast National Park. This small rocky stack of approximately 8 ha is home to 20 000 breeding pairs of Cape Gannets, as well as healthy populations of African Black Oystercatchers.

The island is extremely smelly from all the guano that is constantly being delivered and often rained from the sky as the gannets fly overhead, showering your gear and yourself in a not so delightful smelly white smear. It is so extremely noisy with the squawking of thousands and thousands of birds that it makes clear thinking difficult. Wind and sun often play havoc with you and your gear, wearing you down so that after four or five days photographing, you are totally and utterly exhausted! And with so many subjects around, you would think that the photography is easy – Think again! It is very difficult to create order out of the chaos of the masses and you really need to concentrate hard in order to find something memorable and eye-catching! But despite all of these hardships, I absolutely love the place and am extremely privileged to have worked there on several occasions. 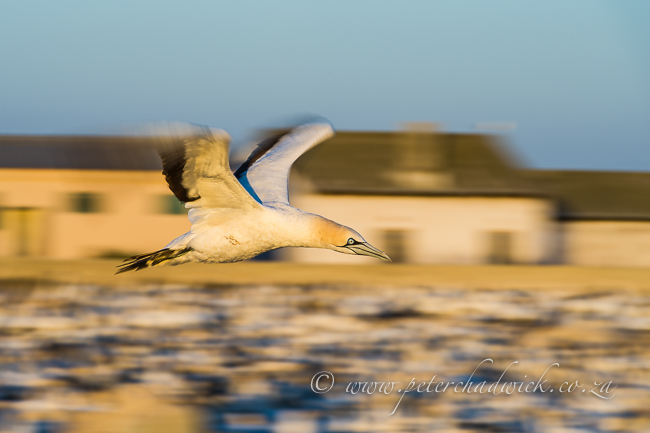 Malgas Island needs special permission to visit and permits are required from both the Department of Environmental Affairs and SANParks. This is rightly so as disturbance of the birds needs to be limited. I have been working on a photographic project with both of these organisations to collect iconic images that will promote and garner support for our countries marine protected areas. Most of my photographic work focuses around conservation photography and photojournalism and as such I have formed African Conservation Photography 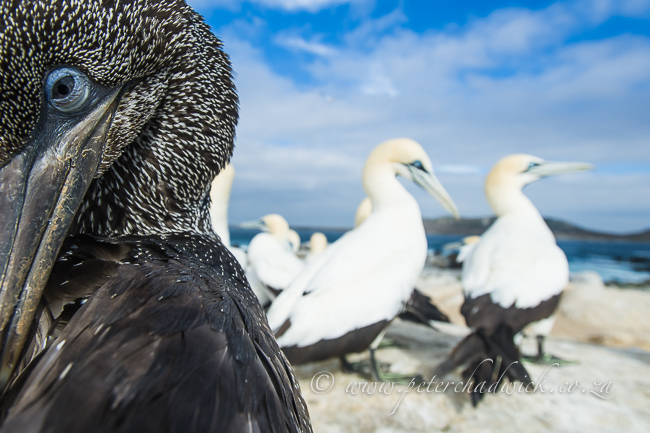 Although I make use of the full range of my Nikon lenses and Nikon D3s camera body, on Malgas, I try and concentrate on using my Nikon 50mm f1.4 lens. On one side of the island, bachelor birds congregate on the large granite boulders to preen and socialise. By me lying still on these domes for several hours, the birds soon carry on with their activities, totally ignoring me and allowing unique images to be taken that showcase a portion of the gannet’s daily lives. 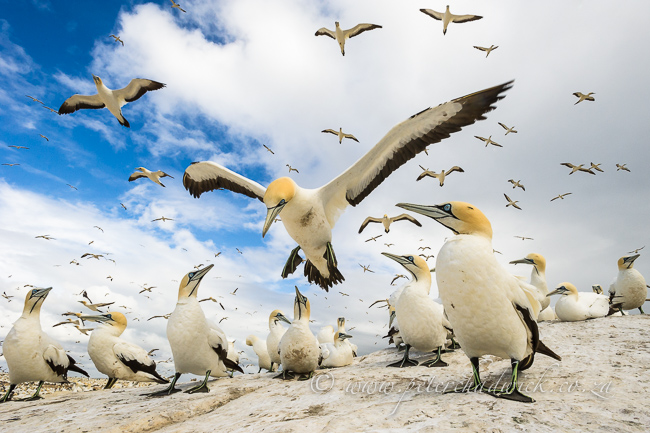 Through spending so much time on the island, incredible and often heart-wrenching battles for survival often play out before my eyes. On one occasion, I watched a juvenile gannet attempt its first flight. The clumsy youngster launched into the air only to plop down on to the sea where powerful west coast ocean waves pounded the shoreline. Over and over again the gannet got absolutely smashed by the waves, never giving up and eventually after about twenty minutes made it through to backline only to be grabbed and killed by a hungry Cape Fur Seal! 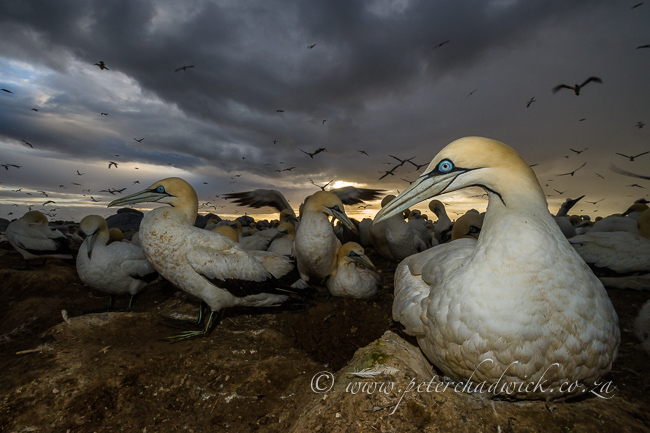 Cape Gannet numbers are declining at 1% per annum, meaning that we have lost 50% of the global population in just 50 years. This is largely as a result of human induced pressures and in particular, the overfishing of our oceans. It has saddened me immensely to notice the declines in nesting gannets on an annual basis and see the many empty nests. We have a responsibility to change our endless exploitation of the oceans, not only for the gannet’s sake but also eventually for our own well-being! Make a difference and support BirdLife South Africa’s Seabird Programme