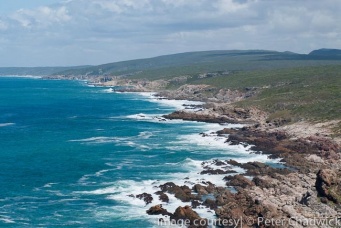 De Hoop Marine Protected Area is situated in the south-western Cape of South Africa and was proclaimed on the 1st of January 1985. It lies adjacent to De Hoop Nature Reserve and is managed by CapeNature. The Marine Protected Area (MPA) covers an area of approximately 253 square kilometers, including the coastline from Stillbaai Point in the east and Ryspunt in the west. It extends offshore for three nautical miles.

Its goals are to protect marine ecosystems that are representative of the warm temperate south-coast zone and ensure ecological functioning in these eco-systems. It also protects depleted, endangered and endemic species and populations and habitats which are important for the revival of these species and populations. Through achieving these goals, the MPA is helping achieve the National goal of contributing to the long-term viability of marine fisheries, while also providing for opportunities for non-consumptive eco-tourism.

The De Hoop MPA has been successful in actively protecting populations of sought after reef fish and in providing migrant recruits of over fished species such as red steenbras and galjoen to other areas. The importance of this area lies in the fact that it represents an intertidal system of large, eroding, soft sandstone and limestone platforms which have not been protected elsewhere in the country. The overall diversity and healthy status of this MPA means that it is a fully functional eco-system that also protects healthy populations of apex predators which are so critical to the environment. Wildlife and conservation photographer Peter Chadwick spent a number of years working on the MPA and shares some of its incredible diversity. 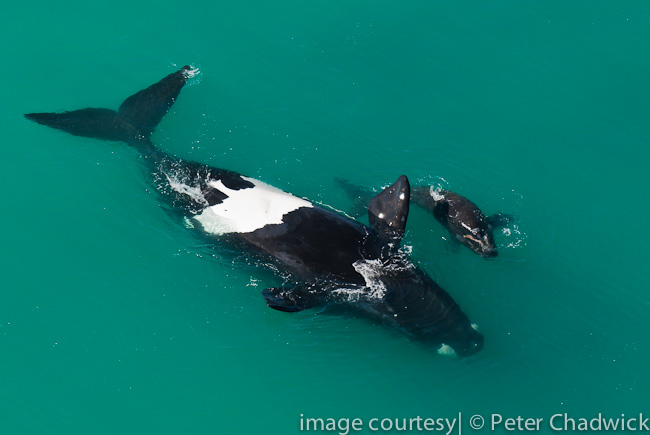 1. De Hoop Marine Protected Area is probably best known for the winter viewing of Southern Right Whales which come into the sheltered bay to calve and mate. Up to 350 whales have been recorded at one time within MPA boundaries, making this a critically important location for global Southern Right Whale populations. 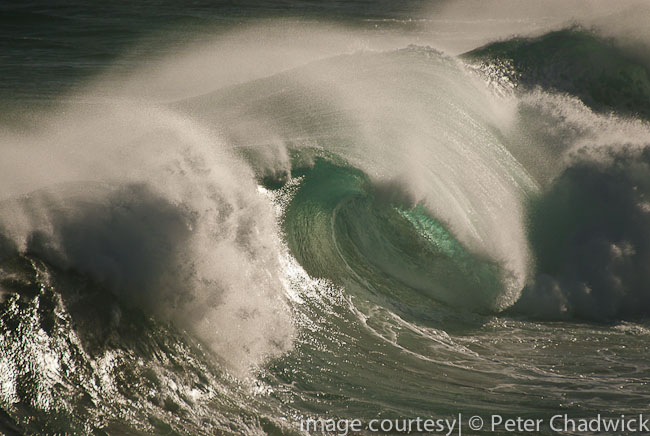 2. Powerful waves batter the coastline during winter storms. These storm fronts bring critical nutrients into the MPA and originate far in the southern oceans. 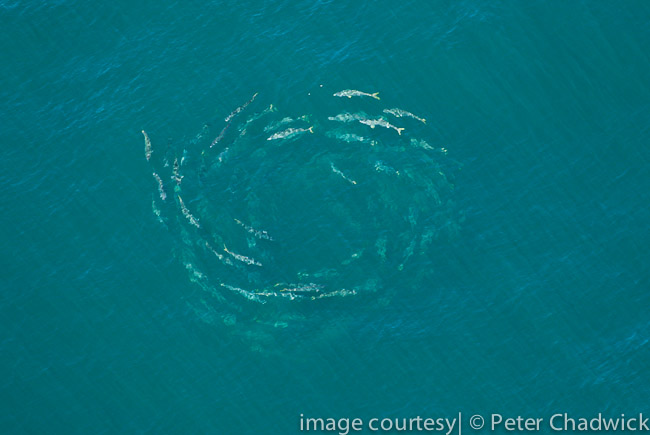 3. The nutrient rich waters and healthy ecosystems within De Hoop Marine Protected Area attract shoaling pelagic species such as these Yellowtail that are forming a tight circle to prey on smaller species 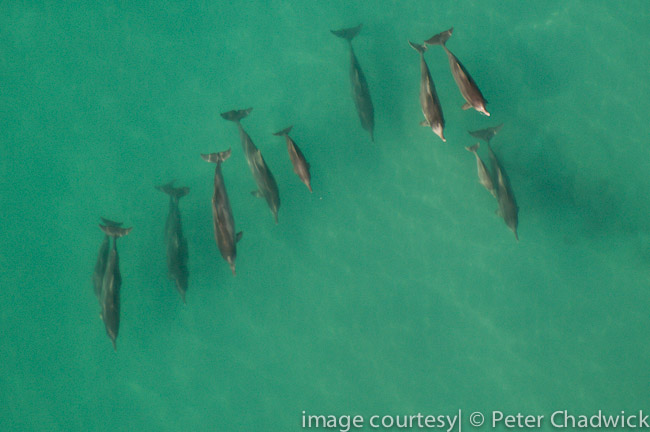 4. Healthy populations of dolphin are resident within MPA boundaries and include  a few families of the Humpbacked Dolphin whose numbers are dwindling rapidly. 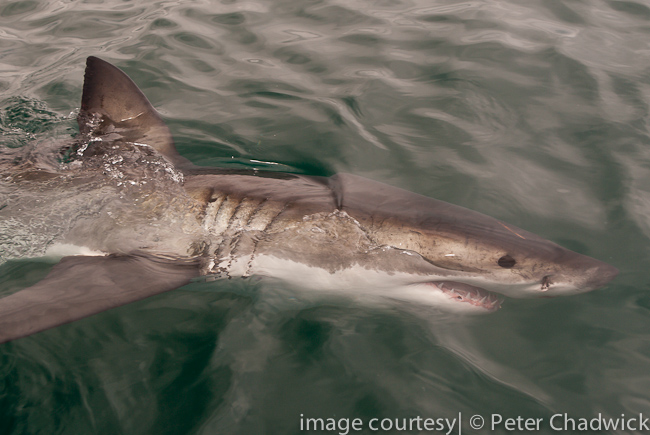 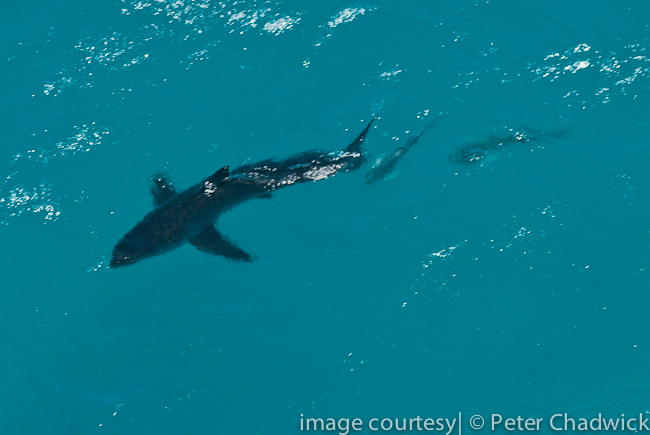 6. Unusual behaviour of large game fish following Great White Sharks is regularly recorded within De Hoop MPA Though the reasons for this is not entirely clear, it is speculated that the game fish might be keeping an eye on their potential predator, much the same as impala keep a close eye on lions in terrestrial game reserves. Another theory is that the game fish rub against the rough skin of the sharks to remove external parasites. 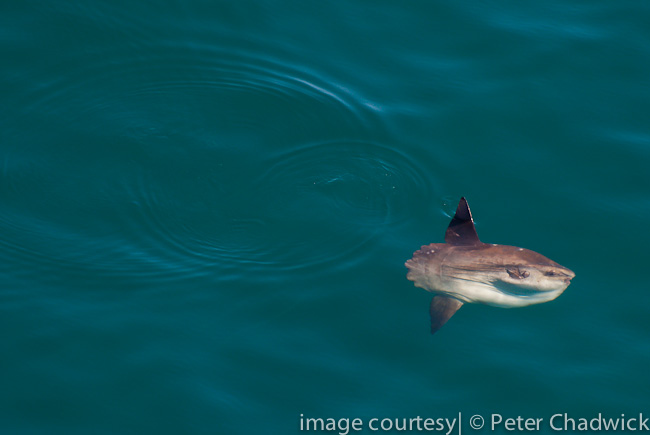 7. During late summer, Mola Mola may be recorded close inshore and are often seen repeatedly launching themselves out of the water to crash hard onto the surface in an attempt to dislodge external parasites. 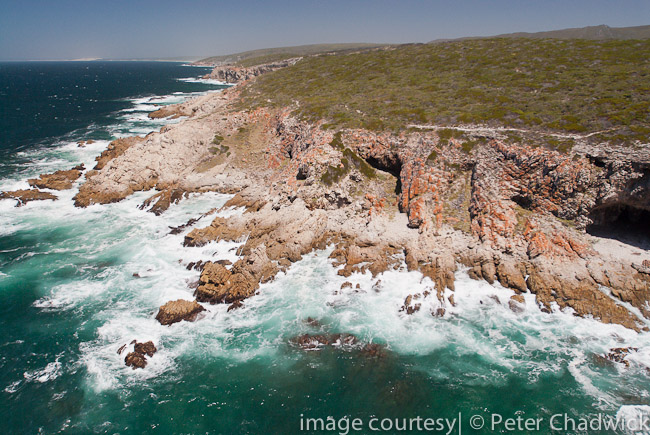 8. The eastern section of the MPA comprises deep water up to 80m with a rugged steep coastline with numerous reef systems. 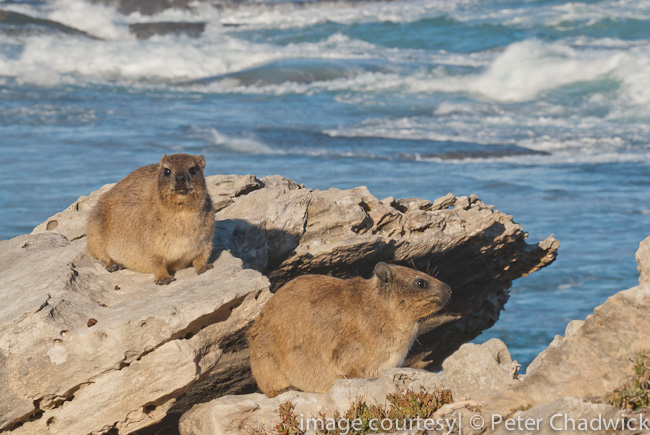 9. Numerous terrestrial species are reliant on the coastline and come down to feed on the intertidal platforms. These include Rock Hyrax, Porcupine, Mongoose and even Leopard 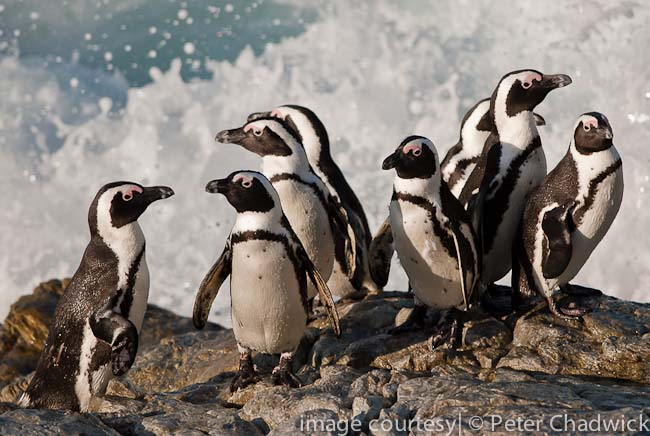 10. In 2005, a small colony of African Penguins formed a breeding colony in the isolated eastern section of De Hoop MPA, but were heavily predated upon by terrestrial predators. The penguins regulary feed in the rich waters of the MPA and this is an important feeding ground for these critically endangered birds. 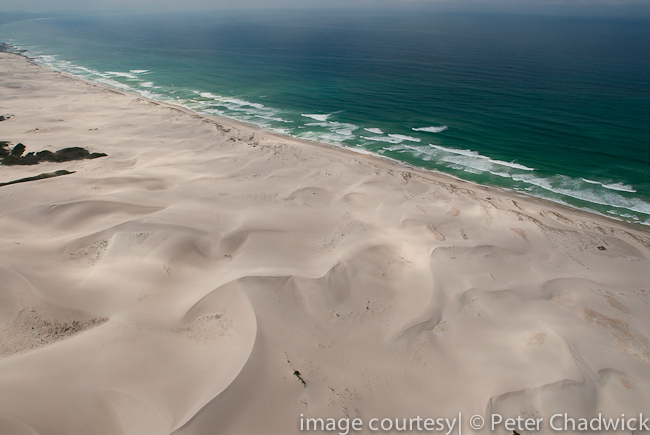 11. Large mobile sand dunes occur in the western section of the MPA and are abutted by a large shallow sheltered bay which is the main breeding site for Southern Right Whales and for summer densities of Great White Sharks. 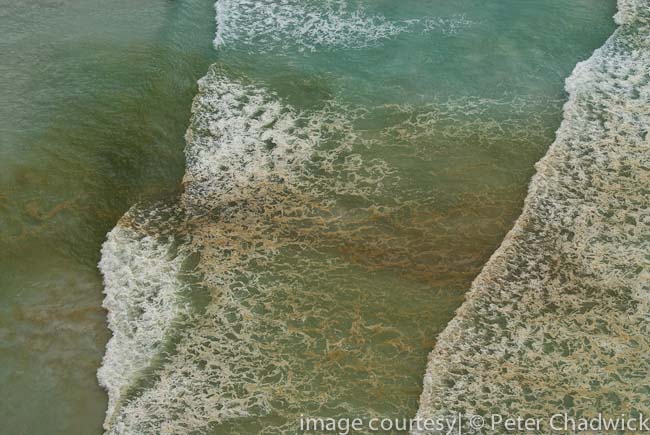 12. Nutrient rich dinoflagelate blooms are a regular occurance within the MPA and are the basis of a rich food web that attract shoals of bait fish, predatory fish and apex predators. 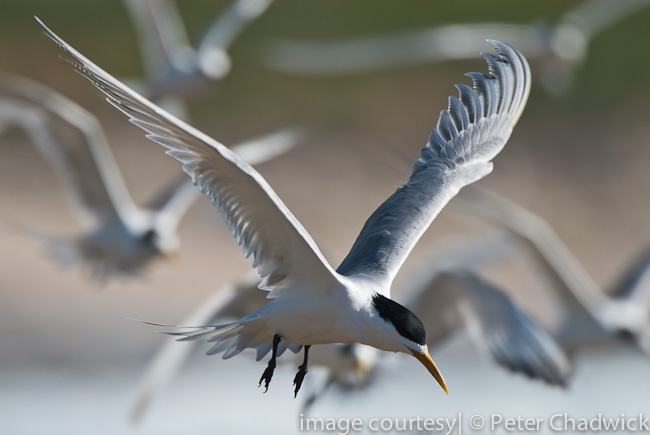 13. Numerous coastal bird species can be found within the MPA and are attracted by the healthy populations of food. Here a flock of Swift Tenrns feeds in the shallow waters of the MPA on small bait fish that are fed to recently fledged young that came from the near-by Deyer Island 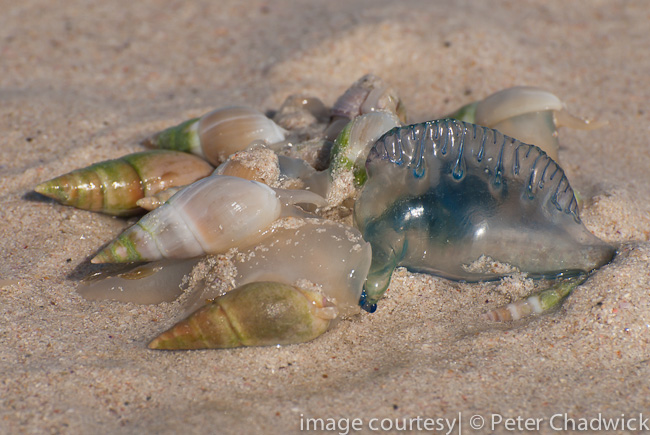 14. Ploughshare snails that are normally hidden below the sands surface emerge to feed on a stranded blue bottle. 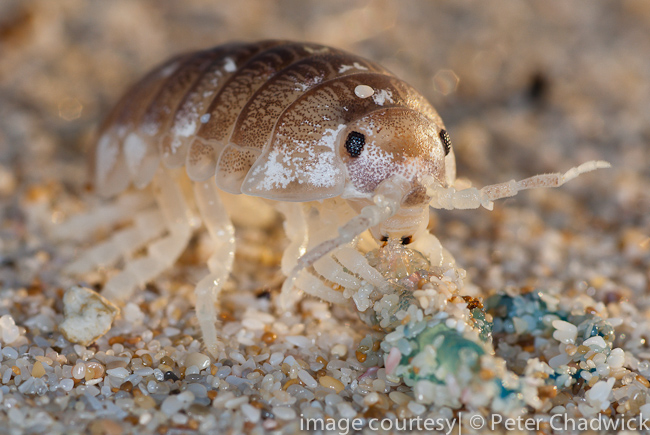 15. A nocturnal Tylos emerges at dusk to feed along the shoreline on detritous that has been left by the high tide. The beach system of the MPA holds a healthy diversity of facinating invertebrates 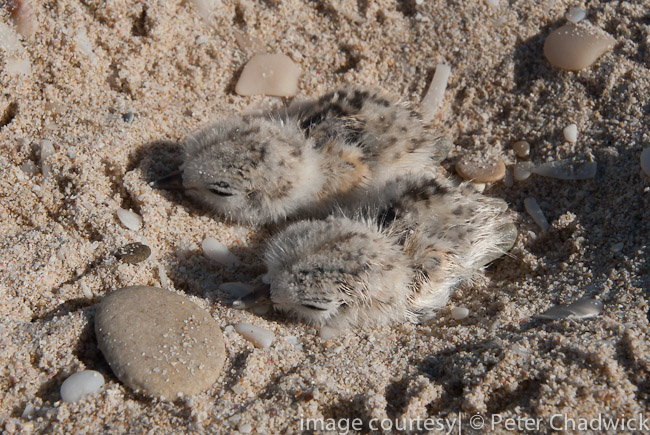 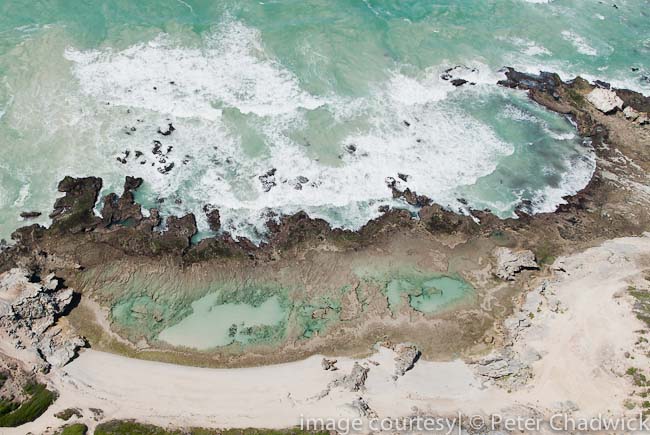 17. It is the limestone and sandstone intertidal platforms that are home to a healthy diversity of life and which make this MPA unique along the South African coastline. 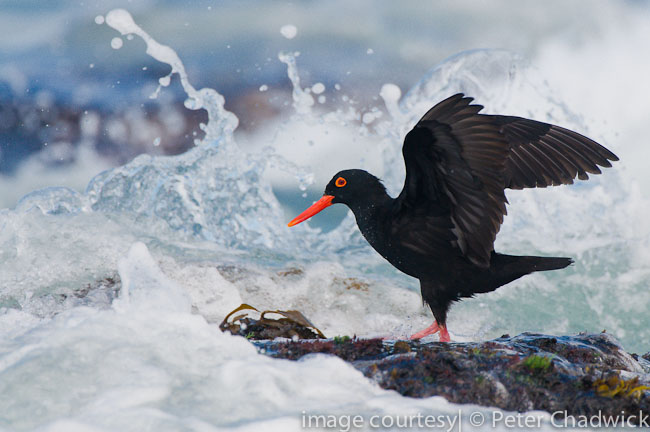 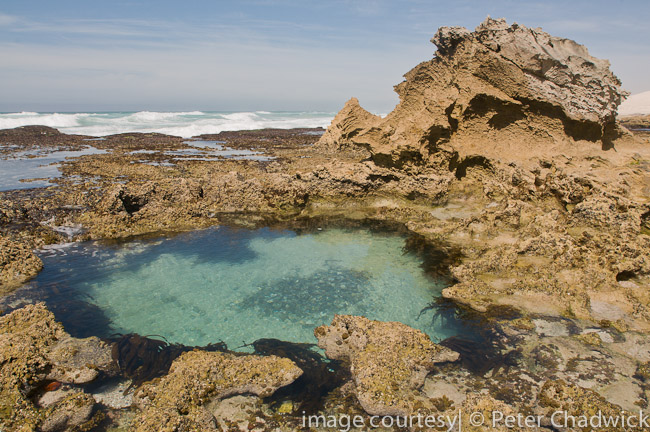 19. Inter-tidal rock pools amongst the sandstone and limestone platforms are important nursery grounds for many reef fish species 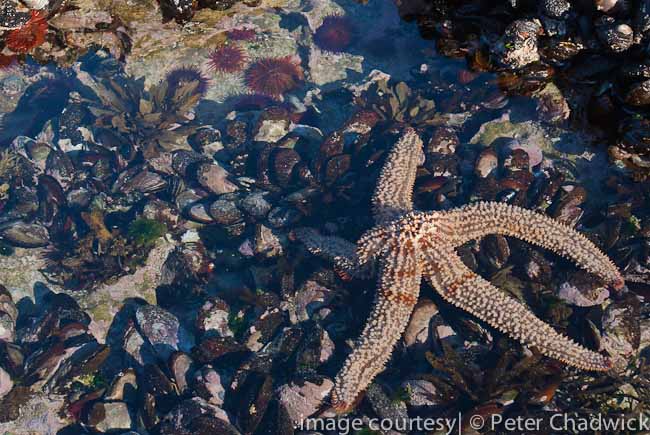 20. The intertidal platforms of the De Hoop MPA are inhabited by a vast array of species of invertebrates. Here a Thorny Starfish that is predatory moves across a bed of mussels. 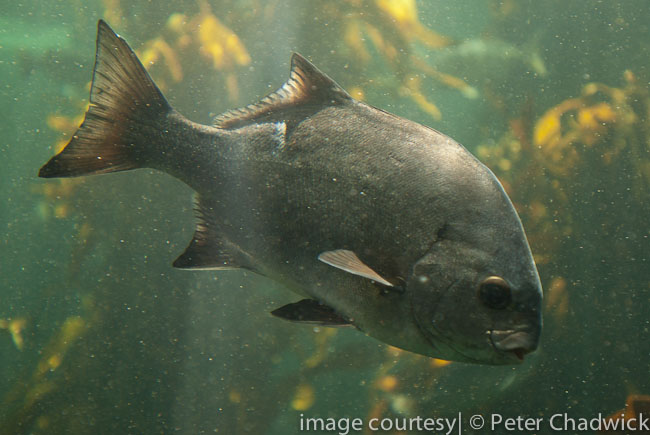 21.De Hoop MPA has been vital to the recovery of South Africa's national fish the Galjoen. Through the recovery of this species within the MPA boundaries, spillover into adajacent areas has occured positively supporting recreational and rock and surf angling. 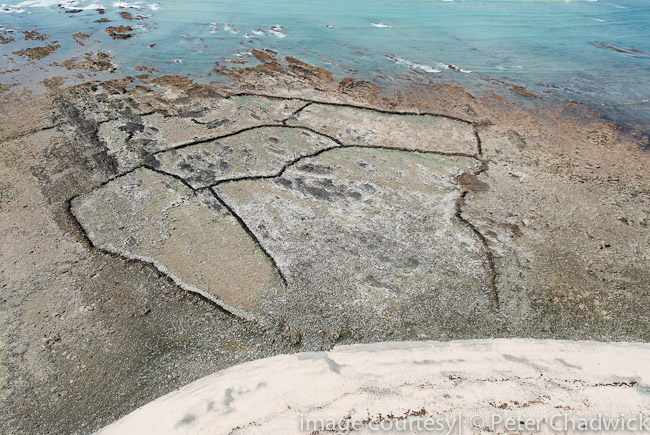 22. De Hoop MPA not only protects critical biodiveristy that underpins socio-economic benefits, but also has a rich cultural and historical past. Khoi-San shell middens occur in high numbers along the coastline and in the western section of the MPA, there are numerous stone built fish-traps. 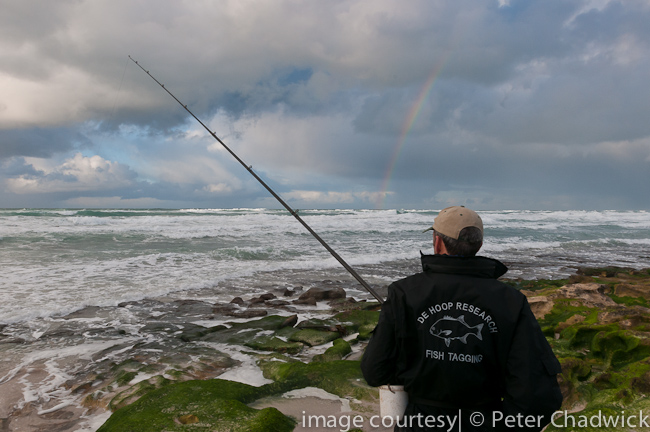 23. De Hoop MPA is an important research and monitoring site that helps to act as a bench mark against non-protected areas, showcasing species recovery and what healthy ecosystems should look like. 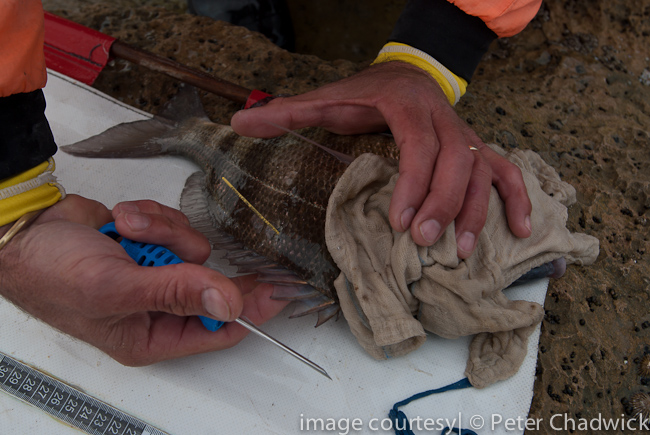 24. The worlds longest running and largest fish tagging monitoring and research programme is undertaken at De Hoop MPA with over 50 000 fish being tagged and released. This has provided vital information that guides National linefish management. 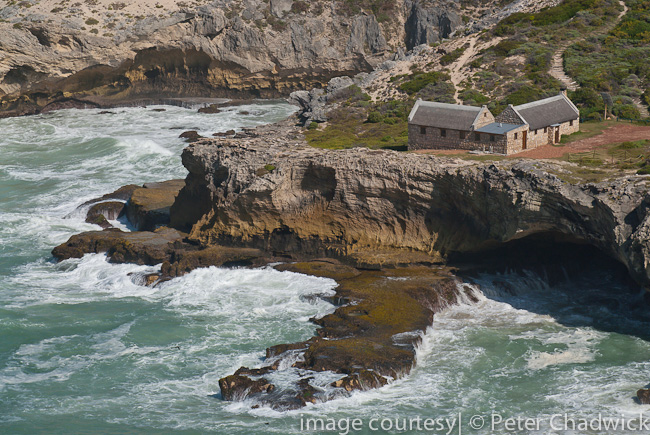 25. Not only is the De Hoop MPA important in protecting biodiversity and supporting line fish recovery but it also promotes and offers some of the best eco-tourism opportunities in the country. The well-known Whale Trail runs along the coastline and De Hoop Collections offers high-end accomodation and guided tours of the coastline. This helps benefit socio-economic development within local communities.