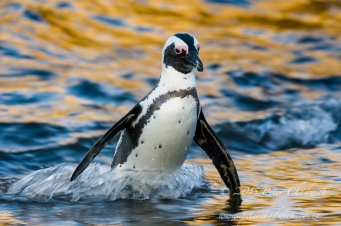 World Penguin Day is celebrated every year on the 25th of April and it is extremely easy for us to love these cute and adorable birds. Sadly though, the penguins are sentinels that highlight the dire threats that are facing our oceans as a result of man's over-exploitation, pollution and misuse of the seas.

Listed as Endangered in the Red Data Book of Birds, the African Penguin is the only penguin to be found on African shores. Once extremely plentiful, its numbers have plummeted and various sources mention the possibility that it could become extinct in the next few decades should populations continue to decline at the current rate.

Although it has faced many man-induced threats in recent history, by far the biggest current threat to the African Penguin is the lack of food as a result of the over-fishing of the oceans. African Penguins mainly feed on Anchovies and Pilchards that are also favoured by commercial purse-sein fisheries.

As a result of the continuing decline in African Penguin numbers, BirdLife South Africa has prioritized scientific research and conservation on the species. Considerable funding has fortunately been received by BirdLife and projects undertaken work towards incorporating the needs of penguins into fishery management as well as ensuring protection for the breeding colonies of penguins.

Current work is trying to ensure that fishing quotas and limits are set that take into account the distribution of fish in relation to where African Penguins occur and feed. Funding has also been obtained to look at the impacts of banning fishing around penguin breeding islands and initial results are positively showing that penguins do not have to swim as far for food where such closures are initiated.

BirdLife South Africa, Wildscreen Exchange and African Conservation Photography are working together to raise awareness of the plight of the African Penguin. For further information or to support penguin conservation, contact Christina Hagen who is leading the African Penguin work at BirdLife South Africa. This email address is being protected from spambots. You need JavaScript enabled to view it. 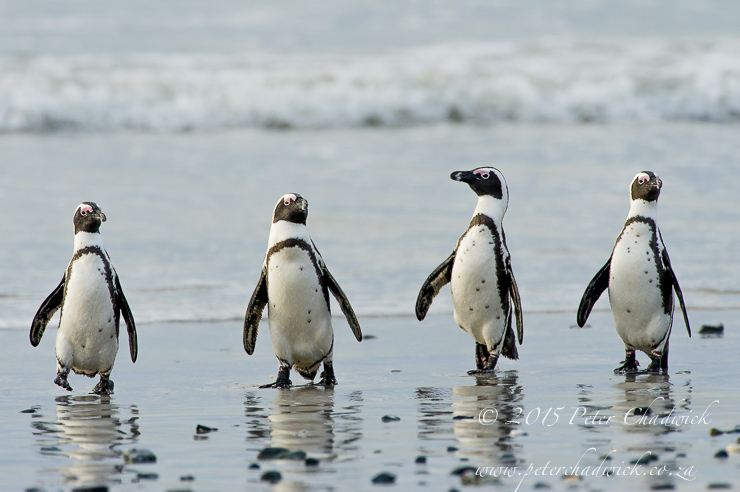 1 of 14: Four African penguins emerge onto a sandy beach on Robben Island after spending the morning fishing at sea. 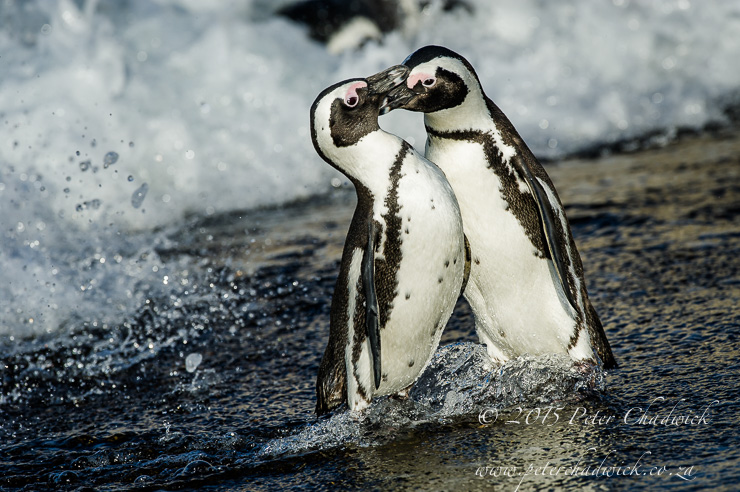 2 of 14: Two African Penguins squabble with one another in the shallow waters of their landing beach on Bird Island in Algoa Bay. 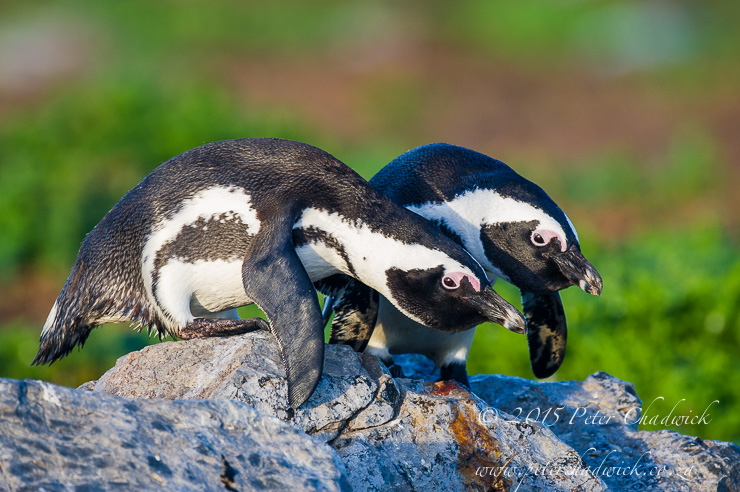 3 of 14: A pair of African Penguins stand close to one another at the start of the breeding season and thereafter, follow each other closely until the nest is built and eggs are laid. 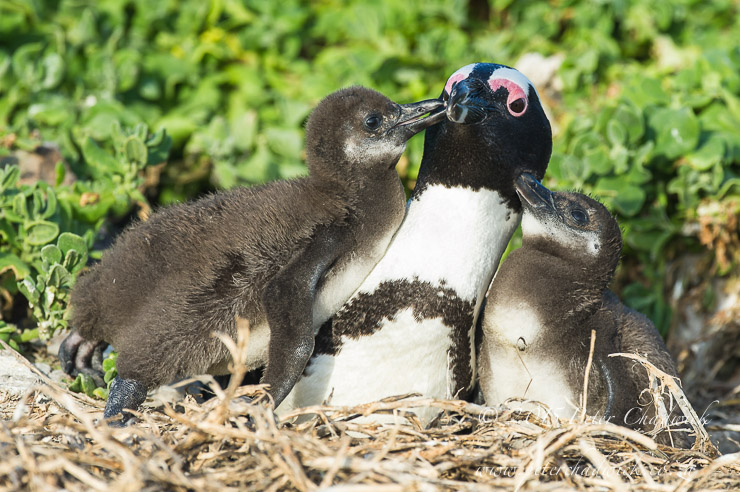 4 of 14: An Adult African Penguin is bombarded by two hungry chicks on its return to the nest and after a fishing session at sea. 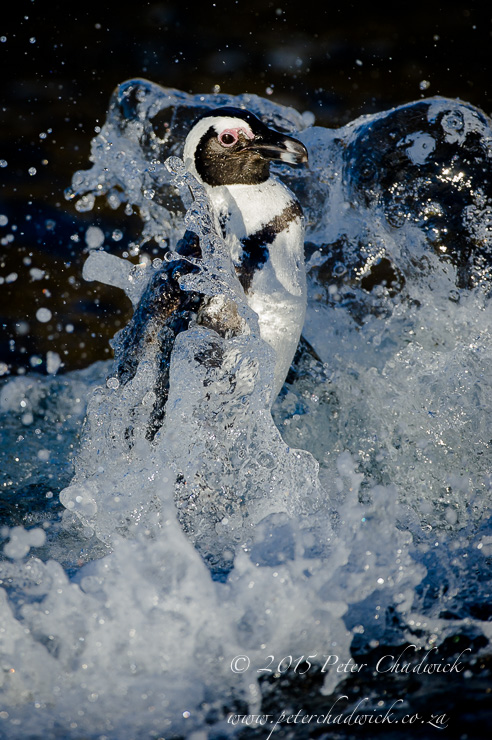 5 of 14: An African Penguins launches ashore at the end of the day and between smashing waves. 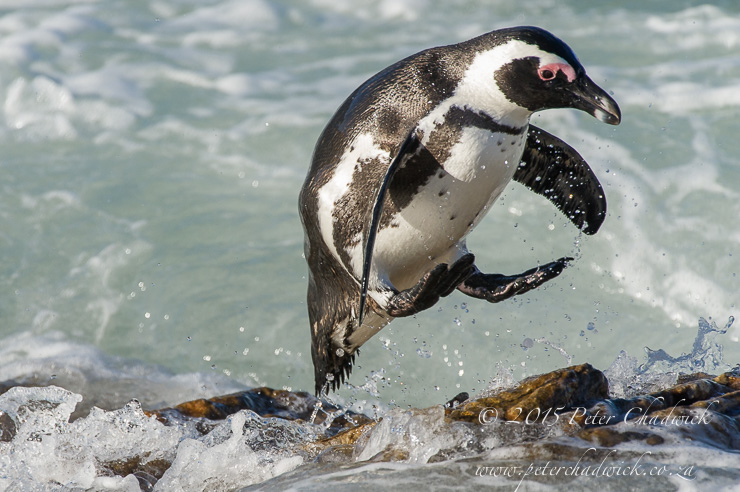 6 of 14: After a day spent feeding at sea, an African Penguin returns to its breeding and rossting colony at Stony Point in the Bettys Bay Marine Protected Area. 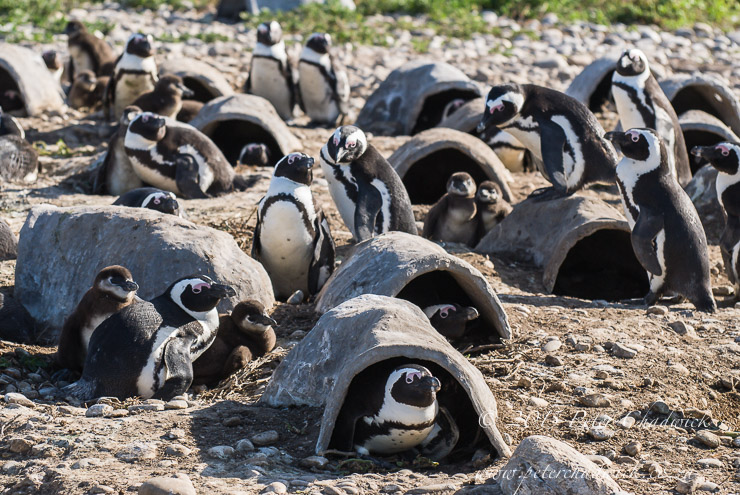 7 of 14: Nest boxes placed out on Dyer Island providing nesting opportunities for African Penguins. The guano collection that took place on all of the offshore islands reduced nesting grounds for the penguins. 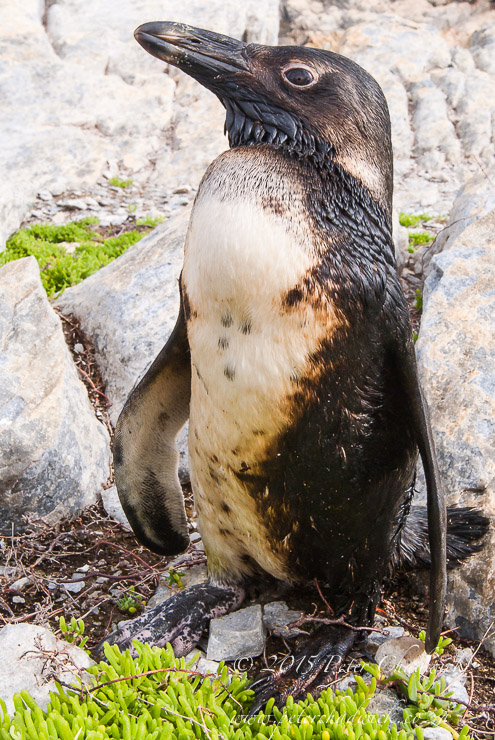 8 of 14: A juvenile African Penguin stands covered in oil that has been dumped overboard by a passing ship. This particular bird was taken for rehabilitation where it was cleaned of oil and later succesfully released. 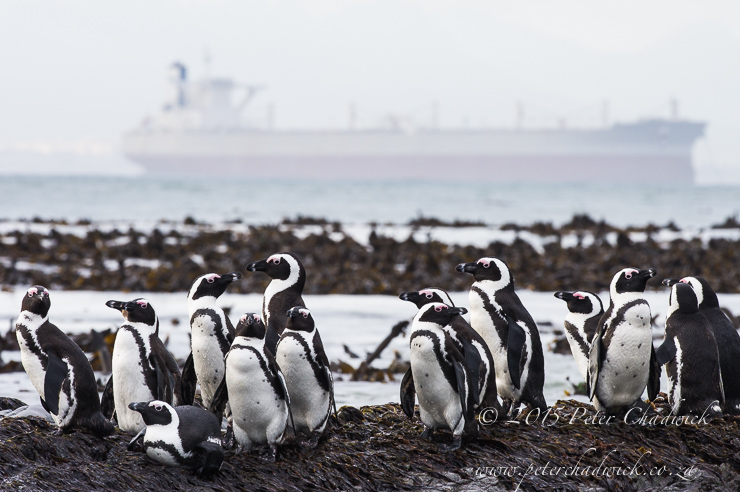 9 of 14: Many of the offshore islands where African Penguins breed, lie close to the shipping lanes, thereby placing them at great risk to an oil spill. 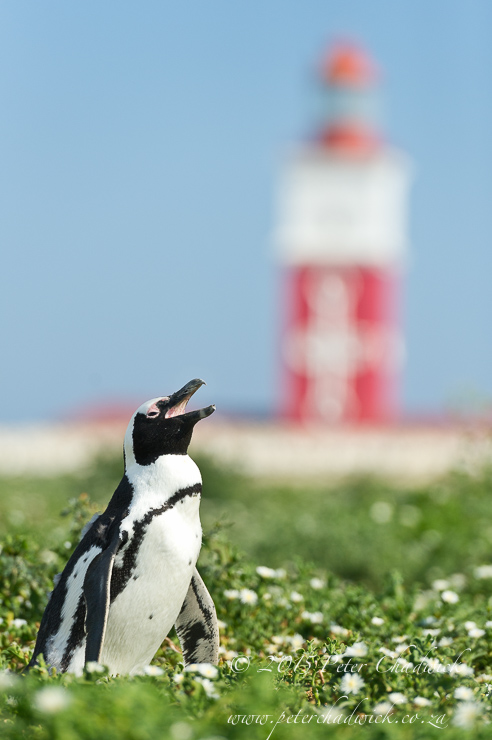 10 of 14: Climate change is already having a negative impact on African Penguin as increasing temperatures are leading to adult birds abandoning their nests to escape the excesive heat. 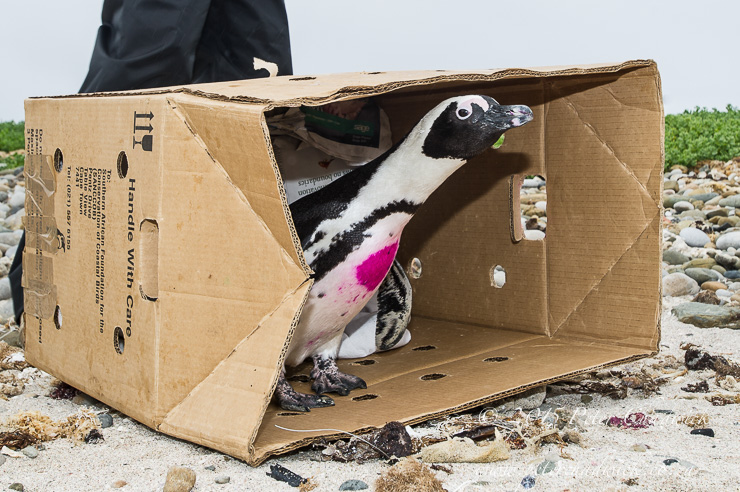 11 of 14: An adult African Penguin peers out of a cardboard box and as it is released back at its breeding colony after having undergone rehabilitation. The pink mark on its chest helps identify the bird and allows monitors to check on the birds health and saftey. The coloration disappears after a few days. 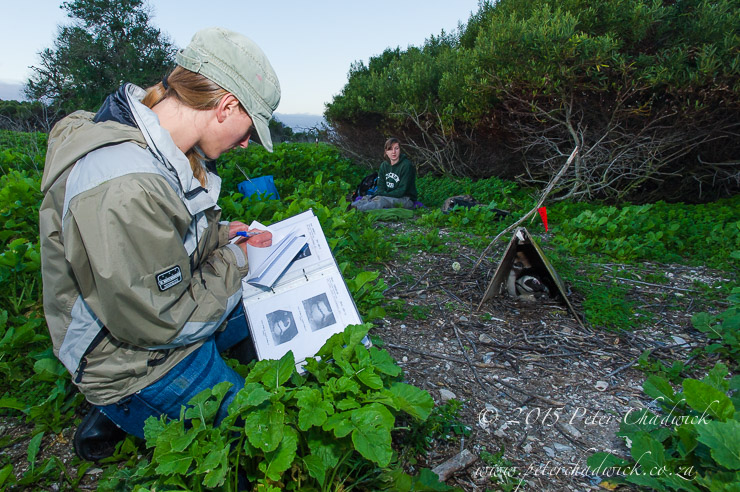 12 of 14: Researchers are carefully monitoring African Penguin populations and are able to identify individual birds from the spot patterns on their chests. 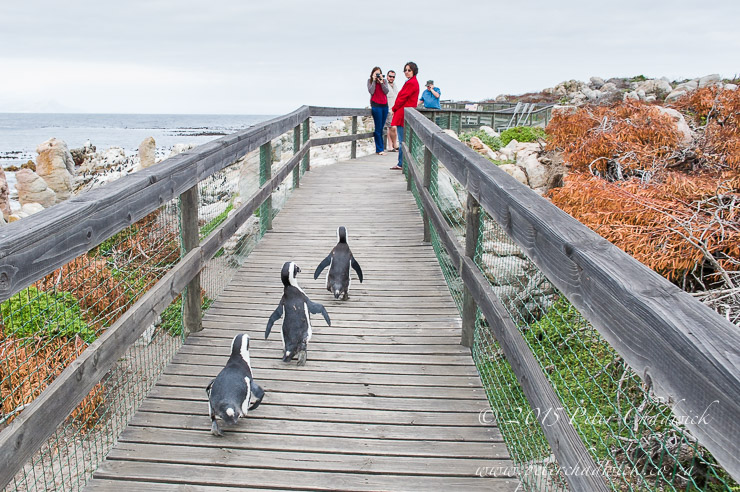 13 of 14: Three African penguins waddle along a boardwalk that keeps tourists from entering the penguin breeding colony at Stony Point in the Bettys Bay Marine Protected Area. Coastal breeding colonies of African Penguin are high priority stop-overs for both local and international visitors and generate huge amounts of revenue for local economies. 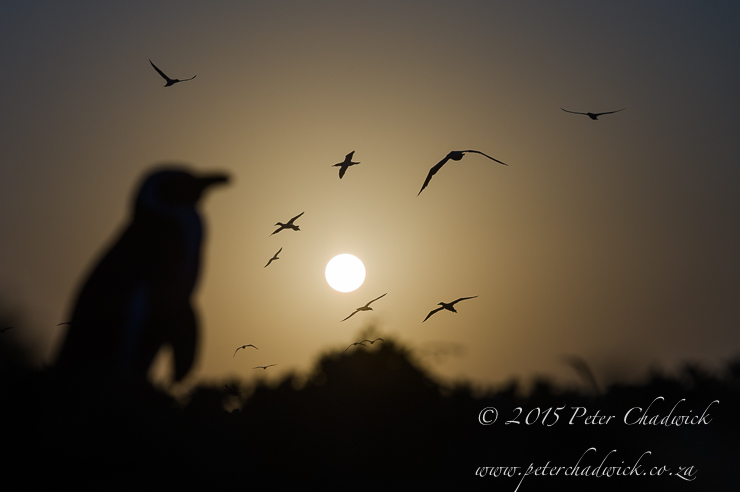 14 of 14: Concerted conservation efforts and public support are vital for ensuring that African Penguin numbers do not decline further.